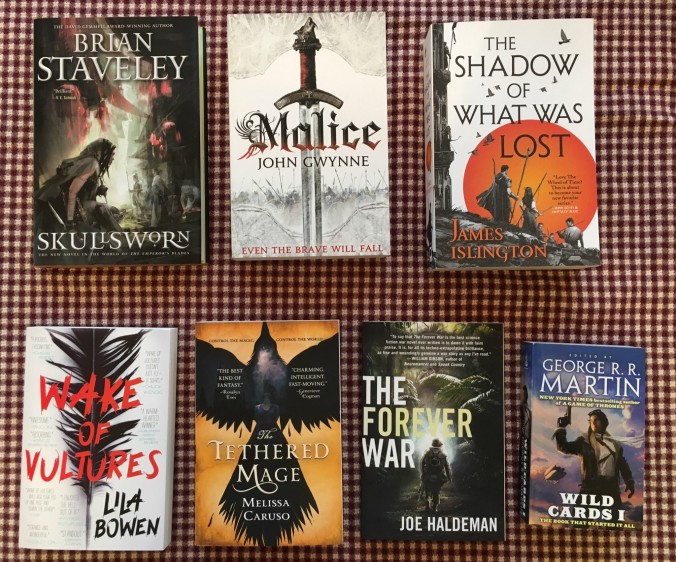 So last Saturday I went and did a thing. It wasn’t a bad thing. But…well…

OK, let me back up. My out-laws (the in-laws…it’s just something we say) were in town to see my daughter’s ballet performance and as kind of an early Christmas. For a Christmas present they got me a gift card to my local independent bookstore.

I’m not sure that they know I’m blogging about books now (maybe they do I don’t know) but I did find out the idea for the gift card actually came from my kids who thought it would be what I would enjoy most right now. Do I have some awesome kids or what!? So yeah, I was pretty excited. I spent the next morning coming up with a list of books I wanted and hightailed it to the bookstore. They didn’t have every title on my list but I did come away with seven new titles I wanted (see pic above) and only had to pay a whopping 18 cents extra after using the card and a couple in-store discounts. 18 cents! I was (still am) pretty stoked.

Now the downside. That’s seven more books added to my TBR. That’s a TBR that already had twelve books on it. Yeah I know it isn’t really a downside because I mean you know…books. But it does mean I’ll be reading for months before they’re all finished and we all know I’ll need to buy more in the coming months because you know…books.

Anyway, I thought I’d post a little bit about why I bought each one.

Earlier this year, before I started the blog, I read the Unhewn Throne Trilogy and absolutely loved it. The reason I started the series was because Skullsworn came out this year and I’d seen a lot of positive press about it, but I couldn’t read it until I’d read the trilogy since they are set in the same world with at least one shared character and Skullsworn is kinda labled like 0.5 in the trilogy. I mean yeah sure, I could have read this one first because it’s supposed to be a standalone, but I didn’t want to. Now that I’m caught up I can finally read Skullsworn and get a review out. It probably won’t happen until after the new year, but be on the lookout for it. It will be nice to be completely up to date on a series for once.

Malice is the first book in The Faithful And The Fallen series. I picked this one up because I’ve read a few good reviews of book four Wrath which came out in 2016 and I saw that a new series in the same world is coming out in January beginning with A Time Of Dread. It is Gwynne’s debut novel. It looked interesting, has great reviews, and hey what’s one more series gonna hurt?

The Shadow Of What Was Lost by James Islington

Since I’d been spending more time in the bookstore this year I’d been noting this book on the shelf a lot. Something about the cover really intrigued me. More recently I’ve been checking out reviews on it and in a number of instances they commented that this would be the next great epic fantasy. Well those are large shoes to fill and the claim definitely needs to be examined. This is the first book in The Licanius Trilogy and book two was released back in August. So the good thing is if I like it I won’t have too many books to read to get caught up. My only concern is that book one was first published in 2014 in Australia so three years went by between books one and two. I like it when books in a series come out a little closer together than that (coughs in fist “GRRM”) but I’m not complaining too much. Yet. Hopefully it won’t though because it wasn’t published in the U.S. until 2016 so the timing seems good. We’ll see.

Wake Of Vultures by Lila Bowen

Lila Bowen is actually a pen name for Delilah Dawson. I originally came across her because she was writing (or rather wrote) Phasma for the Star Wars EU which was published in August. I love all things Star Wars so I started following her on Twitter and only then came to find out about her other work which has been well received. Wake Of Vultures is book one of The Shadow series. Book three A Malice Of Crows just came out in October. (You can see a pattern emerging…latest book comes out, I haven’t read book one yet, need to by book one before I can buy and read book three…). This series really intrigues me with an alternate western fantasy universe of our own world. I’m really looking forward to it and may move it toward the top of my TBR.

On a side note I really enjoy reading Delilah’s posts on Twitter. If you’re on that social media platform you should follow her. She posts a lot about her books obviously, but she also offers a lot in the way of helpful topics for fledgling writers and will answer questions. She really seems to have a heart for authors trying to get into the industry. She also posts a lot about her personal life and some of it is very personal. I really commend her for that. But beyond all that she’s also funny. Funny, personal, helpful, and talks about books. You can follow her at @DelilahSDawson on twitter.

The Tethered Mage by Melissa Caruso

The Tethered Mage is the debut novel by Melissa Caruso. It’s the first in what will be the Swords & Fire series (hey look I’m gonna start a series before book 2 comes out!! Well, if I get to it in time). It is adult fantasy but a lot of reviews I’ve seen want to lump it into YA so maybe it kind of bridges the two. I’ll let you know after I read it. Anyway, I’ve seen some good reviews from a few bloggers who have not steered me wrong yet so I have high hopes. The magic system seems interesting and the Venetian style setting sounds intriguing to me. I also really like the cover. I’m a sucker for covers which I’ll say more about in a future post.

The Forever War by Joe Haldeman

The Forever War has been on my to buy list for ages. I’ve seen it billed in multiple places as the best military science fiction book ever written. Those are some pretty large shoes to fill…so…yeah…of course I need to read it. I also really want to get caught up on some of the classic SF books I’ve never read because I feel like a dork not knowing what everyone else is referencing. It was originally published in 1974 so I’m curious to see how dated it is, if at all. I plan on reading this one in January as part of Vintage Science Fiction Month. Part of me wants to rip into it now but I can be patient. Sometimes.

So yeah…I’m waaaaaayyyyyy behind on this series. The premise is there’s a secret history to the world where an alien virus struck after WWII leaving people with fantastic powers and…well that’s a good intro. The books are compilations of short stories by various authors who all contribute to the world building. I absolutely love editor and contributor George R. R. Martin’s A Song Of Ice And Fire series (Game of Thrones) and I’ve been curious what his SF is like.

So there you have it. Now I’m off to find a good place in my side cabinet where I store my TBR pile for this treasure trove of books. Let me know if you’ve read any of these and what you thought. Just don’t give away any spoilers. Now…back to reading.

8 thoughts on “My Saturday Book Haul”