Travis M. Riddle delivers a dark and creepy exploration into the memory of place and friendship in The Narrows.

I actually read The Narrows as part of my Spooky Reads back in October. As *often* happens with me one thing led to another and I am just now getting to write-up this review. But maybe it’s fitting since the book is set around Christmas. Thankfully I took notes as I read. END_OF_DOCUMENT_TOKEN_TO_BE_REPLACED

Victoria Schwab (V.E. Schwab for her adult novels) offers up a wonderful little supernatural thriller with City of Ghosts. A middle grade ghost story crafted with Schwab’s gift for narrative and filled with equal parts heart, friendship, and spookyness, City of Ghosts is a perfect read for a dark October night. END_OF_DOCUMENT_TOKEN_TO_BE_REPLACED

“Victor and Eli started out as college roommates—brilliant, arrogant, lonely boys who recognized the same sharpness and ambition in each other. In their senior year, a shared research interest in adrenaline, near-death experiences, and seemingly supernatural events reveals an intriguing possibility: that under the right conditions, someone could develop extraordinary abilities. But when their thesis moves from the academic to the experimental, things go horribly wrong” – Back Cover Blurb. 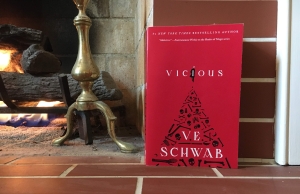 END_OF_DOCUMENT_TOKEN_TO_BE_REPLACED

Waiting on Wednesday is a weekly meme originally hosted by Jill at Breaking the Spine and continued now by Tressa at Wishful Endings under the heading “Can’t Wait Wednesday” where readers and bloggers share and discuss books they are excited about reading and which have generally not yet been released. I’m sticking with “Waiting On Wednesday” just because I like the way it rolls off the tongue.

Fans of the blog will know how much I loved Quenby Olson’s supernatural/horror novel The Half Killed. If you’re not a regular follower check out my review in the link in the previous sentence. Here’s the blurb from the back cover of that one:

“Dorothea Hawes has no wish to renew contact with what lies beyond the veil. After an attempt to take her own life, she has retired into seclusion, but as the wounds on her body heal, she is drawn into a world she wants nothing more than to avoid.

She is sought out by Julian Chissick, a former man of God who wants her help in discovering who is behind the gruesome murder of a young woman. But the manner of death is all too familiar to Dorothea, and she begins to fear that something even more terrible is about to unleash itself on London.

And so Dorothea risks her life and her sanity in order to save people who are oblivious to the threat that hovers over them. It is a task that forces her into a confrontation with her own lurid past, and tests her ability to shape events frighteningly beyond her control.”

As I said in my review, it’s story that will seduce you. I absolutely love Olson’s dark, intimate, and immersive writing style and the Victorian setting. It was a five star read for me, and I’ve been waiting on a follow-up novel for months. Unfortunately this isn’t a Waiting On Wednesday post about book two in the series. From what I understand Olson is working on that story, but it isn’t ready yet. She did write a short story though…and that’s what this post is about END_OF_DOCUMENT_TOKEN_TO_BE_REPLACED