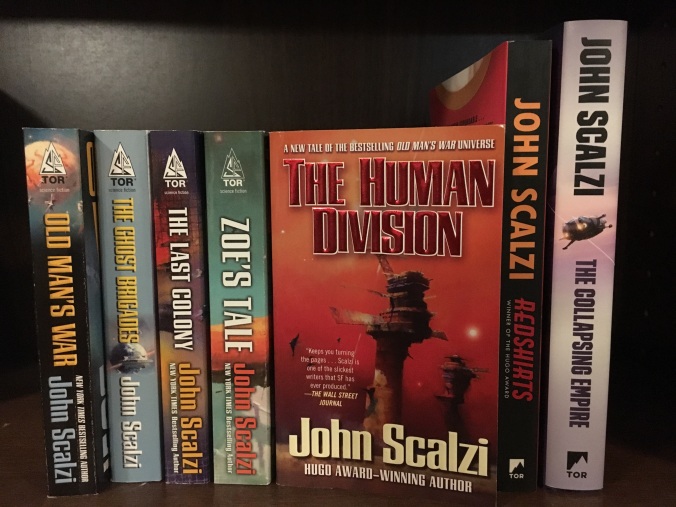 I just finished The Human Division, the 5th book in John Scalzi’s Old Man’s War series. Since it isn’t new and I’ve never written anything for the other books in the series I’m just going to do a short review with no rating.

Like everything I’ve read by Scalzi I enjoyed The Human Division. That isn’t to say it doesn’t have its flaws. I’ll start with them and end on a positive with what I liked.

There are two aspects of Scalzi’s books (of those I’ve read) that always stand out to me both of which relate to dialogue. The first is that his characters are too similar in the way they speak. By that I mean every one of them uses a mix of witty, humorous, snarky speech.  On one hand it does make the dialogue fun and enjoyable to read, but on the other it doesn’t make the characters unique. Because it is fun to read and I often find myself chuckling the similar voice the characters share doesn’t bother me too much, but it is a flaw.

What does bother me is the second thing that stands out…how Scalzi uses dialogue words. Overwhelmingly when a characters finishes speaking we are told they “said” it. You’ll see so-and-so “said” something followed by another character who “said” something line after line. Every so often an “asked” or an “interjected” or some other dialogue word is used, but most of the time someone “said” it, and it really stands out. Now, I know “said” is the most commonly used dialogue word in fiction, and I know everyone does it, but I’ve never noticed it to this degree before. This bothers me much more than the shared voice problem above. Somebody will probably prove me wrong because they’ve analyzed it for their Ph.D. dissertation but whatever…it bugs me…I still like the book though.

Now, what I like…the story.

The Human Division like Scalzi’s other books is a fun read and I’ve enjoyed the whole series so far. The first book, Old Man’s War, began with an interesting concept – taking humans who are in their 70’s and putting their consciences into new, young, green (the color, not the metaphor) bodies to send them off to fight humanity’s wars in space against hundreds of alien species. Each book after the first incorporates that concept but goes in new directions exploring the repercussions of such a policy tied to human colonization among alien worlds. The Human Division continues the narrative with how the practice of sending humans off to fight those wars and colonize other planets has now caused a division within humanity, a split between those on Earth and those who went off to space, and how that division is being exploited by an unknown entity. The story becomes a mission to discover just who is behind the various attacks and plots causing a rift in relations between the two groups of humans, as well as between humans and the newly formed alien Conclave alliance. It read like a mystery in many ways since the whole time you’re trying to figure out “who done-it” and you’re left with a nice cliff-hanger at the end which I assume leads directly into the next novel in the series.

In this story Scalzi’s introduces a new group of characters and brings back one of the secondary characters from previous books in the series. The reader’s familiarity with Wilson and the occasional touch points with previous characters enables the story to progress pretty seamlessly.

Structurally the chapters in The Human Division are set up as episodes. Each of the 13 episodes were originally published individually in e-book format and only later brought together into novel form. My paperback version also had two “Extras” – short stories set prior to and after the events of the novel. Like he did with Zoe’s Tale (a book re-telling the events of the previous novel through the lens of a different character), Scalzi seems to be trying to find new ways to write his stories and I commend him for that.

While The Human Division isn’t a groundbreaking novel it was a fun light read and probably my second favorite book of the series. If you like space adventure/space opera and characters with witty humorous dialogue you’ll enjoy this series and this book, and I’d recommend them both. If you are looking for hardcore science fiction and/or complex characters choose something else.

One thought on “Short Review: The Human Division”