It’s been an age since I last posted about a book haul. Like…(checks calendar)…all the way back to June. I’d hoped to post about my new books a bit more often last year and didn’t do that. Obviously.

One of my blogging goals for 2020 will be to be more intentional about Book Haul posts. I’m aware that it’s possible nobody cares about the books I’ve bought or received, but I kinda like when bloggers post these because it not only puts new books in front of my eyeballs that I might not be aware of, but they also give me an idea of the blogger’s tastes. For my purposes a Book Haul post can include any book I’ve come to possess, not just those I buy, so arcs requested or just sent from publishers will be listed as well.

Today I have four books to show you from December. The first two I found on my doorstep recently, one I picked up after seeing it on Twitter, and the other I bought from the bookstore. 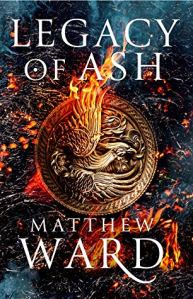 “A shadow has fallen over the Tressian Republic.

While the armies of the Hadari Empire invade the borderlands, the Republic’s noble families plot against each other, divided by personal ambition.

But as Tressia falls, heroes rise.

Viktor Akadra is the Republic’s champion and conqueror of the rebellious south. A warrior without equal, he also hides a secret that would see him burned as a heretic.

Josiri Trelan would gladly see Viktor condemned to the flames – vengeance for a rebellion crushed and a mother slain. And while Josiri plots fresh insurrection, his sister, Calenne, is determined to escape their tarnished legacy and break the shackles of the past.

As dark days beckon, these three must overcome their differences to save the Republic. Yet decades of bad blood are not easily set aside. Victory – if it comes at all – will command a higher price than they could have imagined.” – Goodreads blurb

Legacy of Ash arrived on my doorstep from Orbit unannounced. This was an awesome surprise. It’s kinda cool when you get bookmail from a publisher you didn’t even ask for. In addition to that the story sounds really cool. I’ll admit I like a story where you go into it knowing there’s gonna be conflict between the characters. I’m also a big fan of rebellion stories. The early reviews I’ve seen have been glowing. This one is a door stopper though at 700+ pages so I’ll need to settle into this with multiple nights of quiet and a good warm cider by my side. I’m hoping to read it by the beginning of February.

The Ranger of Marzanna, by Jon Skovron
The Goddess War #1
Orbit Books

When their father is murdered by imperial soldiers, two siblings set out on opposite paths—one will destroy the Empire forever and the other will save it—in this thrilling new Russian inspired epic fantasy from Jon Skovron.

Sonya is training to be a Ranger of Marzanna, an ancient sect of warriors who have protected the land for generations. But the old ways are dying, and the rangers have all been forced into hiding or killed off by the invading Empire.

When her father is murdered by imperial soldiers, she decides to finally take action. Using her skills as a ranger she will travel across the bitter cold tundra and gain the allegiance of the only other force strong enough to take down the invaders.

But nothing about her quest will be easy. Because not everyone is on her side. Her brother, Sebastian, is the most powerful sorcerer the world has ever seen. And he’s fighting for the empire. – Goodreads blurb

This one also arrived on my doorstep unannounced from Orbit. I love Orbit. They publish great books and are super awesome to reviewers and bloggers (extra love goes out to Paola Crespo @_PaolaCrespo and Angela Man @angieeman).

The first thing I noticed was that AMAZING and BEAUTIFUL cover. Oof…the way the tree and the horse and even the rider’s hair all blend together…and the coloring. I love it. I’m a sucker for great covers. Then I read they synopsis and was like yep…this one is for me. Competing siblings…Russian inspired…rangers…magic…yep. I’m really looking forward to reading this one and hope to do so in February or March depending on how quickly I get through the other books on my TBR short stack. 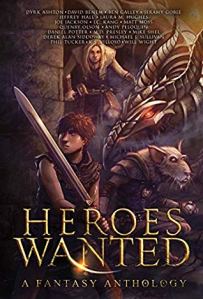 “What do you think a hero is? It’s just the right person in the right place making the right choice at the right time. Heroes aren’t born. They’re made.”

A demonic assassin. A half-orc boxer. A ratman necromancer. Though they take many different shapes and forms, there are heroes all around us.

Bravery can be found in the most unexpected places: a subterranean dwarven city; the sands of a temple courtyard in Ancient Egypt; a besieged castle, a Victorian brothel, a goblin warren, the post-apocalyptic ruins of a demon-infested village. Heroes dwell in the shadows as well as the light; you just have to look a little harder to find them.

Who do they fight?
Some heroes challenge injustice in all its numerous guises, while others hunt monsters both human and bestial. Others battle inner demons, the ghosts of their past, their deepest nightmares – or even the gods themselves.

Why do they fight?
For glory? Sometimes. For honor? Perhaps. There are those who instinctively strive to protect those weaker than themselves, and there are others emboldened only by a sense of obligation, or the promise of wealth. Whether by the blade or other means, they endeavor to take down all who threaten what is good and right in their world.

By hook or by crook, through cunning or combat, with tooth and claw or iron and steel, they are all united in one goal, willingly or not: to live – and die, if necessary – a hero.

Choose your weapon. Fight for what you believe in. Never give up.

Nineteen fantasy writers gather to bring nineteen tales to life, each one a unique glimpse into a wholly original world – Goodreads blurb

I discovered this anthology after seeing some of the authors post about it on Twitter and picked it up immediately. The Kindle version is free on Amazon. It includes fantasy stories from 19 different authors including some favs like Ben Galley, Dyrk Ashton, Michael J. Sullivan, J.C. Kang, K.S. Villoso, and Quenby Olsen. I’m not usually a short-story anthology fan but I couldn’t pass this one up, in part because the cost was just right and in part because there are so many great authors involved. Oh…it also just won the 2019 r/Fantasy Stabby Award for Best Anthology/Collection/Periodical! So yeah I can’t wait to dive into this one…though I don’t know when that will be yet.

A floating prison is home to Earth’s unwanted people, where they are forgotten… but not yet dead, in this wild science fiction adventure

Lena “Horror” Horowitz leads the Daughters of Forgotten Light, one of three vicious gangs fighting for survival on Oubliette. Their fragile truce is shaken when a new shipment arrives from Earth carrying a fresh batch of prisoners and supplies to squabble over. But the delivery includes two new surprises: a drone, and a baby. Earth Senator Linda Dolfuse wants evidence of the bloodthirsty gangs to justify the government finally eradicating the wasters dumped on Oubliette. There’s only one problem: the baby in the drone’s video may be hers. – Goodreads blurb

I bought Daughters of Forgotten Light from my local indie bookstore. I’d been thinking about it ever since it came out, but kept putting it off for one reason or another. I read Grigsby’s Smoke Eaters when it was published and enjoyed it but I haven’t managed to come back to anything else by him simply because other things have come up. But then Beth from Before We Go Blog let me know that Angry Robot had quoted a blurb from me about Smoke Eaters and it made it inside the cover of Daughter’s of Forgotten Light. Blogger goal checked off right there! I had no idea, so once she told me I had to run out and see for myself, and sure enough it’s right there…in print…in a real book you can buy from the bookstore! So yeah I bought the last copy they had. I don’t know when I’l get around to reading it but I’ll let you all know how it goes.

Well, that’s my December book haul. Hopefully I’ll be better about getting these our on a more regular basis. I already have a couple books for January…