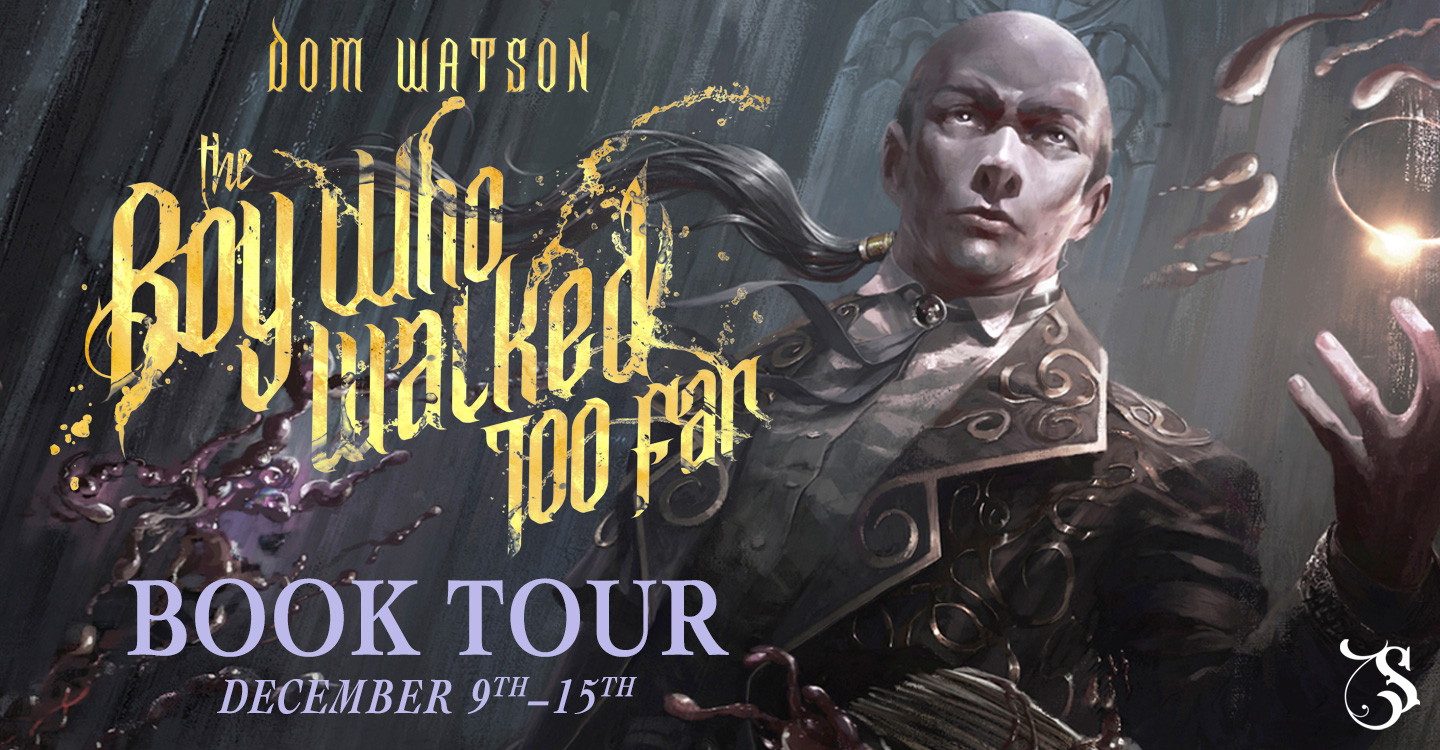 Today is my stop on The Boy Who Walked Too Far book tour!

Let me say at the outset that I haven’t read this book. I knew when I signed up for the tour with Storytellers On Tour that I wouldn’t have time to read it before the event began, but I REALLY wanted to take part. Why you ask? Well, not long before the sign-up request went out I’d read a really positive review of the book that made me put it on my want list. It just sounded so damn cool. So when the request went out for tour roadies I decided I’d have to join in some way even if I couldn’t read and review it just yet. 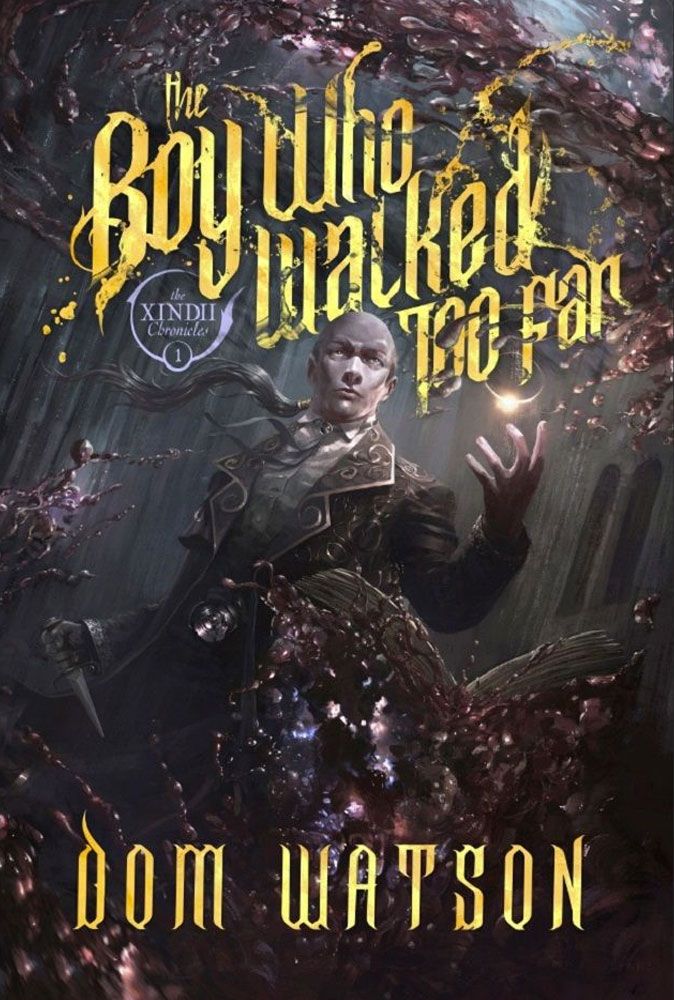 “It’s the end of the universe, and everything has come undone. Entropy has won the war, but one last battle rages in the half-ruined city of Testament.

No one knows who created this last outpost and peopled it with billions of species. However, it is here, under a sky with no stars, that the last remnants of life in the universe live, love, and pray to their many gods. It is here where Godrich Felstrom dies.

Most residents of Testament care little for the affairs of a single, fragile human, but the event brings back bad memories for Heironymous Xindii.

It has been many years since the dreamurlurgy professor discovered his true potential and doomed four people in the process. Now, he lectures to bored students who dream of the many pleasures Testament has to offer. Xindii, on the other hand, becomes obsessed with the mysterious Godrich and his missing soul. As he and his valiant companion, the Neanderthal Solomon Doomfinger, look back at Felstrom’s last steps, they discover the shocking truth about Felstrom’s death, his destiny, and the future of Testament and all those angels, demons, liars, and dreamers who call it home.”

He was bleeding ink.

Wrapping the discoloured handkerchief around the obsidian sheen of his palm, he
crossed the cobbled bridge into Testament, the patchwork metropolis; fused together by
quartz and brick, metal and wood. A conglomeration of the species that had survived and
persevered against the creeping black.

A testament. To endure beyond the finite.

Faiths and religions aplenty, here at the end of everything. The multitude gather in
droves, beneath cathedrals of frosted glass and towers hewn from bone. Spires of marble
and slate tickled the odious clouds of industry.

This night, and every night, the crowd gathered at the base of the Fiz’pah tabernacle, the
universal goddess, a monumental figure of black lead and phosphorescent sheen, holding
firm to the encroaching threat of the deep emptiness that life will out. Entropy licks the
walls of the world, the stars long since exhausted, the planets and galaxies long since
ravaged. Only one remains.

The last diminishing ember in the silent vacuum.

He crept passed worshippers and zealots and headed down into the Dally, a thoroughfare
of market traders and braggers on the fringe of Brentish.

Here in the Dally anything is for sale. Limbs fused with eugenics. Tea pots and babies
and techtrasexual plug-ins. Da’Ka Moths bartered with Sub-Humans over a bag of limes
and rainbow fruit, their avaricious tendencies noticeable by the rhythmic beat of their
gossamer wings. Angels sell biscotti and hot coffee, their once majestic wings now
clipped and strapped by order of the Probability Engine and the Pope of Numbers. There
is no call for feudal faiths on the cusp of nothing.

He heard one muttering a convoluted spiel of venom.

‘I used to turn cities to fucking salt, now I sell coffee and blueberry fucking muffins.’

He pressed on, ink leaking from his palm, the harsh aroma of chemistry now evident. He
cut through down into the Galleries, where that stretch of street art leads him out onto the
embankment. Hotch men watched him – lizard fishermen; straddling the walls of the
Galleries, smoking bramble weed and eating chips, fathers clutching new-borns to their
chests, ravenous Hotch babies ransacking sore nipples. Amphibious tongues licked their
lips and noses to warm milk and pillowed comfort.

He didn’t even raise their interest; river folk are so seldom interested in the affairs of
bleeding humans. Glow lamps beckoned him onwards, the warm blue light of the network
illustrating the way. Iron pipes clad the Galleries, and larvae of the Darklands glow worm
infested the cat’s cradle of degrading metal: biological light, seething and spawning
through the confines of the ancient narrows. He took the steady decline of the Galleries
and it opened onto the embankment and the grey granite cottages that littered its baroque
facias.

Streaks of green crisscrossed the framework of the houses, sentient lichen, cleansing the
walls of all foreign substances: mucus from curious crab-worms, shit from low flying
bratternicks. It never tires, phantom brushstrokes eating and absorbing the detritus of
everyday waste.

Of course, this was only affordable to the minority. This part of the city was affluent,
home to bankers and philanthropists, solicitors and architects. They littered the
embankment and the cafes, ordering two raeq note coffees and rainbow strudels,
immersing themselves in laborious ten-minute consultations and three-hour days.

But all is not as it seems, the underside of Brentish reveals an altogether darker side.
There, on the edge of Brentish, on the periphery of Eshreet, the foundries pounded
constantly into the night.

Ramshackle flats with rust-rain smothered rooftops and grimy tenements snow-capped
with excreta. If you were alien to this borough you would be forgiven for thinking it was
some artisan bolt hole, an avant-garde statement of contemporary art. The hardened shit:
wax-like, heaped with the industrial dripping of the foundries.

Here, the work never stopped. Da’ka Moths selling their woven wares on the fouled
street. Sub-Humans and Hotch take the monorail into Katta-mah-geer.

He reached the corner of Fropick & Pine and crossed the road to the Lamb & Flag. He
was nervous, the faint sheen of sweat on his brow suspect in the cool night air of a
Frugalmeyan spring. He cast his eye back the way he came. Footsteps, but nothing
definite. Nothing tangible.

A drunken couple kissed and pawed at the entrance to Fellini’s across the street, a heady
afternoon of drinking taking its toll, their stomachs now yearning for substance, yet they
couldn’t manage to take the first initial steps into the restaurant, the only hunger winning
that of moist lips and imagined love play.

He pushed the door open and slunk through. It was surprisingly sparse for a Cratchet
evening. The end of the working week; normally Brentish would be heaving, especially
this quarter. Perhaps it was early, or late. He didn’t know.

Looking to his right he noticed a pale couple waving from the snug: Nesscalite twins,
brother and sister, holding hands and casually taking a drink out of each other. Vampire
siblings forever joined. He noticed the third glass on the table. The blood sucking duo
took what time they had from others absence, the female leaning in to take a bite out of
her brother, the secluded dark of the inglenook snug shrouding them from the view of the
rest of the pub.

He leaned on the bar and asked for a pint of Bludgeon, tossing over a two raeq note and
telling the bar keep not to bother with the change. The pint came with a tiny napkin,
absorbing what residue decided to escape the glass. He took it and discreetly pulled a
shard of glass from his palm, ink flowed, pitch distillate. He gritted his teeth and stifled
the hot evisceration. Pulled the pint up to his lips and took a fair swig. He leaned on the
bar and stared into the mirror behind the stacked glasses. A stranger looked back. He
recognized the face. It was his, naturally, but the thoughts were someone else’s. Thoughts
being re-written, the faces of family and brethren distorting, the experiences of life edited
into a cohesive narrative of pure malice. He pulled himself from the bar and ploughed
into the toilets. There was burning within, ancient sigils rose from beneath the flesh that
owned him, the ink of an undying lexicon that wanted to absorb and digest his existence.
He felt it, his body, thoughts clouding, the author standing at the cross-roads with the
utmost power – the power of life and death and the full-stop. He reached deep into his
jacket and pulled out a phial of luminescence—Kraken’s Milk—popping the cap and
swallowing it whole. He looked deep into the mirror. Blood and ink, a hurricane of wills,
fighting within the spherical confines of his eyeballs.

He walked back into the bar, almost refreshed. He’d washed his face and hair, the
coolness of the water steadying the change in body temperature as his heart rate began to
climb.

He walked over to the snug and deposited himself with the vampire twins.

Shrugging his shoulders, he took another lengthy swig of his pint.

‘Shit, you took something?’

He smiled. The cheeks of his face stretching back unnaturally to the point where Kiko
and her brother Mensch could see the sinuous workings of his jaw.

Her words tickled the confines of his ear, spiralling down the stem of his spine in a flurry
of tactile coaxing. It descended, pleasurably, until it nestled on the cusp of his anus;
warm, quivering. He giggled, blushing, dizzy.

He ignored it at first. He thought it was the Kraken’s Milk, making all the nerves in his
body throb and ebb. It was the most unusual sensation, a faint static exploring the terrain
of his gut, and then it tightened, twisted his stomach inside-out.

He leaned over the table, the horrendous pain galvanising him into shouting for help.
None came. His larynx paralysed; a guttural rasping of the throat was all that was audible.

Something moved and turned in the wet sanctum of his belly, producing a mixture of ink
and bile which seeped from his mouth and nose.

All he could hear were the screams of the people in the bar, and the turgid sound of
something burrowing up from his gut and into his throat. It sounded like old boots
walking on freshly laid snow. His gullet expanded and stretched and eventually ruptured.
There was a deep crack. His jaw snapping, vision subsided and turned a faint hue of grey.

A fist drenched in ink emerged among parted lips and teeth, the black hand opened with
the beauty and grace of a morning rose revealing sharp caramel nails, reaching out with
pianist fingers. It clasped Godrich’s skull and with alien dexterity it squeezed. The head
cracked, ink pouring from rents in the breach.

The misshapen head tilted and swayed, falling in a deluge of mangled brain and suspect
matter.

Wow! Did that opening grab you like it did me? Do you want to read the book now as much as I do? If that opening chapter got you excited to read the whole story check out the links below for more reviews on The Boy Who Walked Too Far and where you can purchase a copy. 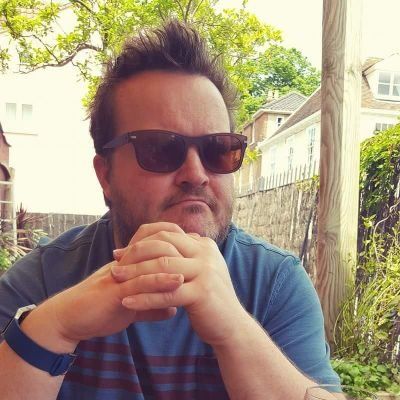 Dom Watson lives, writes, and dreams in Suffolk, England. He enjoys life with his wife, daughter, and three cats. He also doesn’t mind the occasional glass of merlot.

Be on the lookout for additional stops on The Boy Who Walked Too Far book tour over the coming days! Be sure to check out the blogs and posts from the other tour roadies!!

One thought on “The Boy Who Walked Too Far Book Tour”