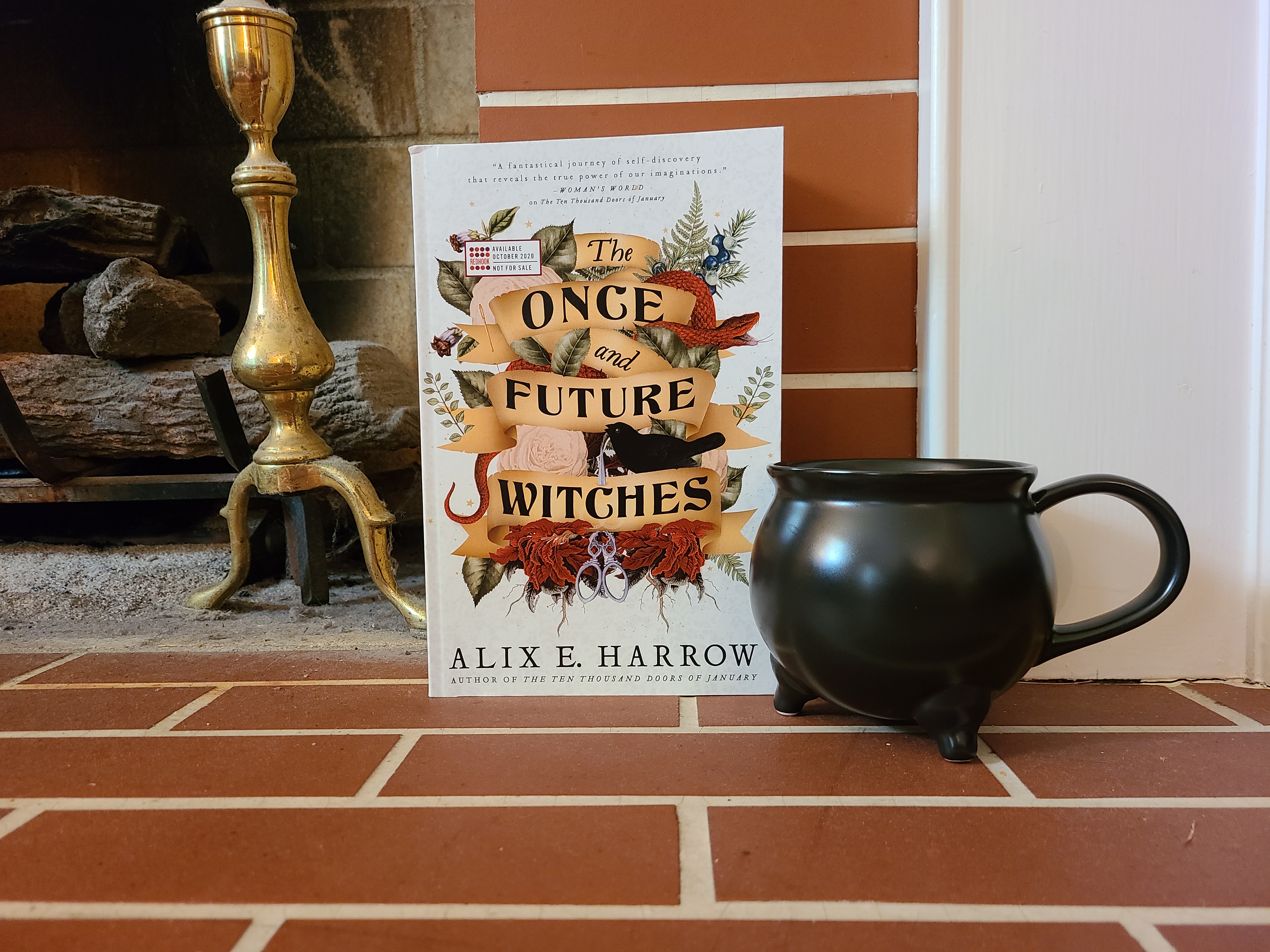 I laughed, I raged, and I cried. The Once And Future Witches is magic on the wings of Autumn, ash and roses on the air, and the promise of a new world birthed with will, and words, and way.

Alix E. Harrow has done it again. Fresh off the heels of the beautifully written The Ten Thousand Doors of January, comes a book that is even better!

“In 1893, there’s no such thing as witches. There used to be, in the wild, dark days before the burnings began, but now witching is nothing but tidy charms and nursery rhymes. If the modern woman wants any measure of power, she must find it at the ballot box.

But when the Eastwood sisters–James Juniper, Agnes Amaranth, and Beatrice Belladonna–join the suffragists of New Salem, they begin to pursue the forgotten words and ways that might turn the women’s movement into the witch’s movement. Stalked by shadows and sickness, hunted by forces who will not suffer a witch to vote-and perhaps not even to live-the sisters will need to delve into the oldest magics, draw new alliances, and heal the bond between them if they want to survive.

There’s no such thing as witches. But there will be.” – Goodreads blurb

“Suffragette Witches.” That was Alix E. Harrow’s two word pitch for this book and when I first read it I thought “oh this will have to be good.” Good doesn’t even come close to describing what you’ll find in these pages. This book is a mood. This book is a season put to words. This book is emotion set free. This book is…well…magic.

The Once And Future Witches follows the story of the three Eastwood sisters, James Juniper, Agnes Amaranth, and Beatrice Belladonna. It’s set in 1893 in what may be best described as a parallel world to ours. Or one on a slightly different timeline. Historical events are similar to those in our world but just slightly different. Books and stories are similar but also slightly different. It’s a world where witchy magic exists and thought of as evil.

I don’t want to tell you much more about the story except to say it really is about suffragette witches. But in truth it’s more a story about women and things denied to them; about power, and rights; about what one does to survive; and about what happens when women say “no more.”

What I do want to talk about is my reading experience with this story. Because…oof…this was an experience. First let me say that if you’ve read anything else by Harrow and if you adore her writing style you will also love this read. But, where The Ten Thousand Doors of January was filled with rich and poetic, and at times other-worldly prose, The Once And Future Witches is more like some of her short stories, poetic at times and still very rich, but more pointed and focused on a mood or emotion. What Harrow excels at is taking that mood and emotion – like anger or rage – and fueling it with that wonderful prose to stir something in you. And stir it she does. While I loved The Ten Thousand Doors of January it didn’t have the emotional impact The once and Future Witches did. My emotions were tossed up and down and flung all around while reading this book. I felt anger and rage and heartache for these characters and wanted justice. And at the end of this one I cried. I cried because I love these characters (especially James Juniper), and I cried because…well…it gave me all the feels.

I also loved some of the little things Harrow did in the narrative. One favorite was the way every chapter began with a spell. Typically a snippet from a nursery rhyme or fairy tale you might already know, changed ever so slightly, used as the words to a witch spell with a short description of its use and required ingredients. These little spells were then tied to something occurring within the chapter.

Another little thing was the way almost every chapter started with a statement about one of the sisters, usually beginning with their name and then some sentence about their mood, or what they are doing, or something in their past. It was this simple narrative device that helped tie the book together while giving a foundation for what was coming in the chapter.

Then there’s the story itself. Yeah, it’s about witches and votes for women, and all that. But it is so much more. Again, I won’t give anything else away, but the story will take you on a wild ride from rural mountain farms to urban factories, from joy and happiness to sorrow and despair and everything in-between. It’s a story that asks you to “remember what you are” and makes you realize you may not be what you’ve been told you are; that if dismembering is tearing something apart and destroying what was, that remembering it putting the pieces back together to rediscover what was always there whether you knew it or not. It’s a story that says magic is real and it exists and all it takes for you to work it is the will, the words, and the way.

If you had any doubt as to whether Alix E. Harrow could deliver a second time around you should take them and toss them into the fire. I know there’s a few months left in the year and I’ve got a stack of books still to devour, but right now The Once and Future Witches is at the top of my favorite reads of 2020. Put this one on order and put it at the top of your October reading list. Then sit down next to a comfy fire with a warm autumn drink, open the book and know, “There’s still no such thing as witches…but there will be.”

14 thoughts on “Book Review: The Once And Future Witches”