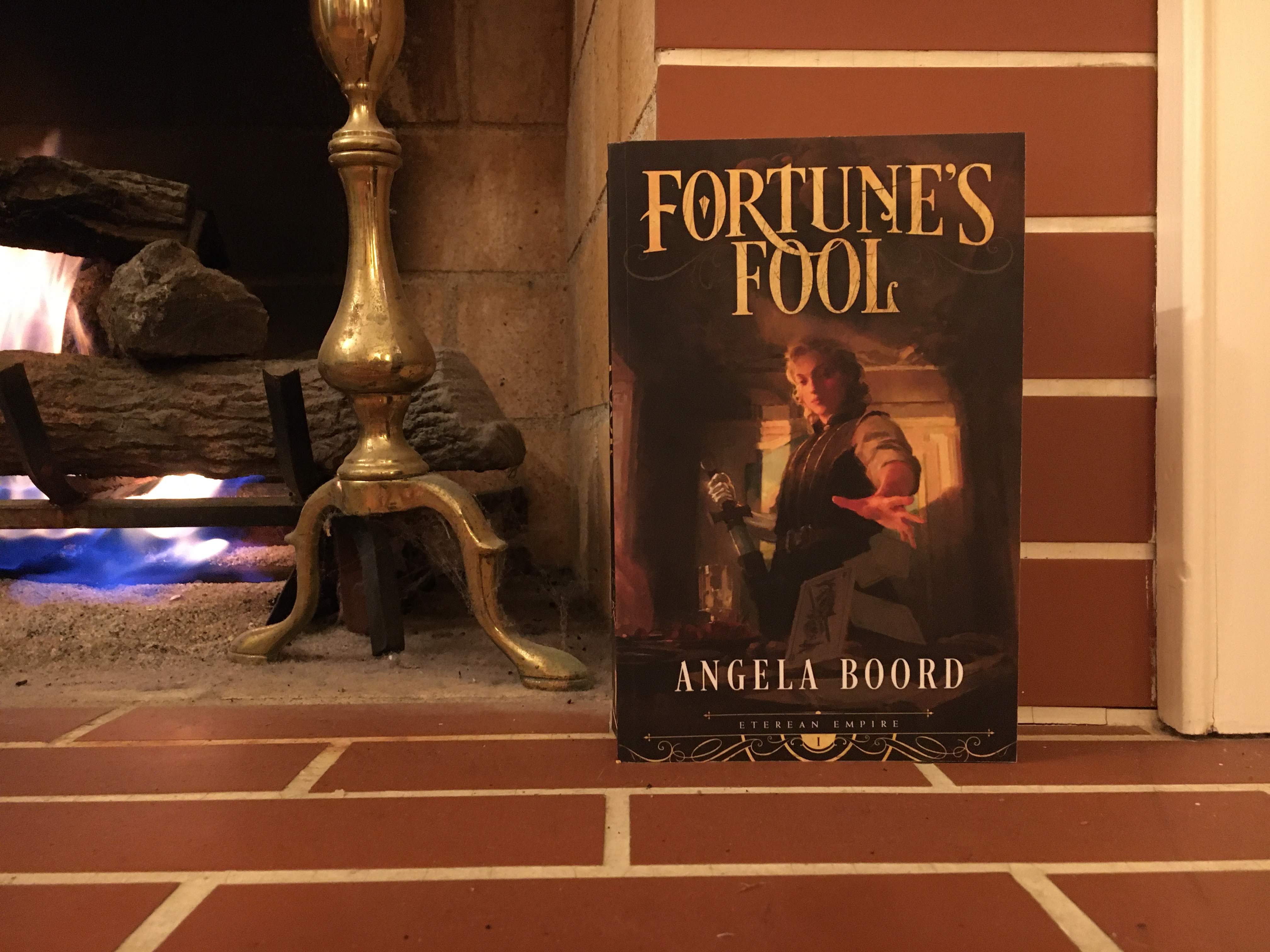 Recently the Self-Published Fantasy Month Team posted a list of some self-published fantasy recs for those who have not read much self-published fantasy and don’t know where to start with finding a good book to read. Our hope was to offer up a few suggestions each while admitting the list would leave out a bunch of great books and authors. I hate leaving out great stories so I decided to re-post the reviews of all the self-published fantasy books I’ve really enjoyed over the last few years. Over the coming days and weeks I’ll be re-posting them here in the lead up to Self-Published Fantasy Month. My hope is you might find one that catches your interest for September!

Tonight’s installment is reposted from March 23, 2020 when I actually changed a rating for the first and only time from a 4.5 to a 5.0 Stars.

I first reviewed Fortune’s Fool back in September 2019 as part of Self-Published Fantasy Month and gave it a 4.5 of 5 Stars. Tonight I’m changing that rating to 5 Stars. Why am I doing that? Well, because as the book has sat with me I’ve realized to an even greater extent how well it was written and how much it impacted me. You see it was this book which made me realize that I might enjoy fantasy romance. Now, I know I will probably never read a pure romance novel. That pure genre form isn’t for me. But fantasy with romance…that I can read. And it was Fortune’s Fool which helped me realize that not only could I read fantasy romance, but that I might think it was good…or even great. Fortune’s Fool has stuck with me and it has impacted how I read books after it. For that it deserves some additional praise.

Below is my original review unedited except for the final rating. I hope you’ll give this book a chance and that you enjoy it as much as I did.

Angela Boord’s Renaissance inspired debut is simply fantastic. A character driven tale of mystery, political intrigue, warring noble houses, and a woman at the center of it all who will stop at nothing until the wrong done to her is avenged. Oh…and did I mention the slow burn romance? Yeah, it has that too.

War destroyed her family and the man she loved.

Vengeance is within her grasp.

But is she willing to pay its price? – Goodreads Blurb

Fortune’s fool is very much a character driven book. I love these kinds of stories because they really make me feel for and root for the characters. Most are secondary but all have depth and their own little mysteries. I’ve listed just a handful here who play a primary part throughout whether in terms of page count, or based on their impact on the overall story.

Kyrra d’Aliente known throughout much of the story as Kyris di Nada (Kyris No Name) is the protagonist in Fortune’s Fool and the novel’s POV character. Boord actually presents us with two alternating versions of Kyrra. We first meet her as Kyris an adult mercenary who is disguising herself as a man. She has a metal arm, a replacement for one that was severed as punishment after the fallout from an ill advised love affair. She’s on a two-part quest to find the man she loves, who may or may not still be alive, and to kill the man who was the cause of her disfigurement. This Kyrra is also a force to be reckoned with in a fight. It may or may not have something to do with that arm.

The other version of Kyrra is her younger self, the teenager from years before who fell for a man who was using her for nefarious reasons. This Kyrra is young and immature, and…well…a teenager. She suddenly and violently comes to know how intrigues between noble houses are played out after becoming a pawn among them. This Kyrra goes from nobility to serf and must learn to navigate the world with one arm from her new position in life.

Much of the story alternates between these two Kyrra points of view. I’ll have more to say about that below under pacing and structure.

Arsenault is a mercenary brought in by Kyrra’s father to help protect his estates and his daughter. Kyrra soon begins to fall for this older man with a mysterious past. He’s not always what he seems and may have multiple loyalties. He’s also the one who gives Kyrra her metal arm before he disappears.

The Prinze are the noble family out to destroy the Aliente. Geoffre the father, and his younger son Cassis both become her enemies. She sets out to destroy them for what they did to her and to her family. Yet as with everyone else in this story there’s more to them than meets the eye.

Fortune’s Fool is a book I’d raise up as a great example of how self-published does not equal bad writing. The writing is tight and it is evident Boord spent a lot of time in the editing process whether she did it herself or obtained outside help. But what stood out to me most was how Boord kept me turning the pages. This is a book that is over 700 pages long and each time I sat down to read I didn’t want to stop. The only thing that really did stop me was knowing it was late and I had to go to work the next day. To keep me turning pages with a book this thick means you have to keep me engaged and she did just that.

What’s really interesting to me is that she kept me engaged even though the overall pacing isn’t very fast. The pacing kind of fits the slow burn romance that makes up much of the story (more on that below). That, and the mystery element built into it with multi-layered reveals doled out throughout the entire book.

Most of the story alternates between Adult Kyrra and teenage Kyrra. This back and forth device is at the core of the way the book is plotted and structured and serves as means of delayed gratification for the reader. It is the primary way in which the narrative is slowed down. Instead of racing forward in the present with info dumps to explain the past, Boord uses this device to slowly reveal the background of the story as one plot line catches up to the other. Through this the mystery of how Kyrra ended up disguised as a man with a metal arm out for revenge looking for her lost love is revealed little by little. And through it all the reader discovers even more mysteries that weren’t evident at first when one plot twist after another is thrown into the mix right up to the dramatic end.

Boord delivers in this category as well. The world she’s created in Fortune’s Fool is steeped in history and the politics of feuding houses. A world of magic, swords, and recently introduced black powder weapons. As a Renaissance inspired story leading noble families descended from a past empire figure prominently. Each with their own sphere of influence they vie for power among their peers. It is this ongoing game of intrigue that Kyrra finds herself caught in the middle of without knowing exactly why. It is this constant scheming among the houses she sets out to unravel no matter what the consequences after her life and world is taken from her.

Magic and the gods also play a part though it is subtle throughout most of the book. If I say too much it will give away some vital plot points so I’ll just touch on a few things. Magic exists though it isn’t widespread, and it’s even frowned upon in some ways. Those who wield it do so in specific and often subtle forms. The gods are acknowledged and worshiped but often seen as perhaps more myth than real. Yet they have an important impact on the characters and story.

First let me say that I’m not normally a fan of romance. It just isn’t my normal cup of tea. I’m very much a fan of action and suspense. So it says something when I read a novel of this length that has romance as a core element throughout and I finish it…and even more telling when I like it. The slow burn style that Boord managed to weave into this narrative may have made me a new fan of fantasy romance. This element is crucial to the overall story as it gives Kyrra part of her purpose to continue on. It’s possible she wouldn’t if revenge were her only motive. Her search for her lost lover drives her ever forward just as much as her desire to exact a toll on those who wronged her. Interestingly it is youthful romance (or perhaps lust) that sets all the pieces of the story in motion, that ultimately creates the thirst for revenge, and it is romance that creates the new person Kyrra comes to be, that sets her on her path forward, and makes her whole again.

The other purpose in Kyrra’s life is revenge. She seeks revenge on those who took her arm, those who destroyed her family, and those who took away her lover. It’s a theme established early in the book and the excitement comes in how it slowly plays out through multiple twists and turns. At times you’re never sure just who all will, or should be the recipient of Kyrra’s vengeance nor how deep it goes.

Boord takes the trope of a woman wronged and used for the purposes of others and flips it. Like women throughout the centuries younger Kyrra is one who isn’t in ultimate control of what happens to her. She’s used by the Prinze, she’s used by both her mother and father, she’s even used by society at large, all for their own ends or as an excuse for their actions. It is older Kyrra though who has taken control of what happens to her. No longer bound by rules of family obligation, no longer a pawn to be used to bait or trap an opponent, she is now a self-made queen on the chessboard moving among the remaining pieces as she desires until she can check her enemies. In the end it will be Kyrra who decides her own fate and spits in the face of all those who seek to use her.

I really can’t express how much I mean that. What did I really like you ask?

And so very odd for me…

I was sent a copy of this book by the author. I also hosted the cover reveal for this book prior to publication.