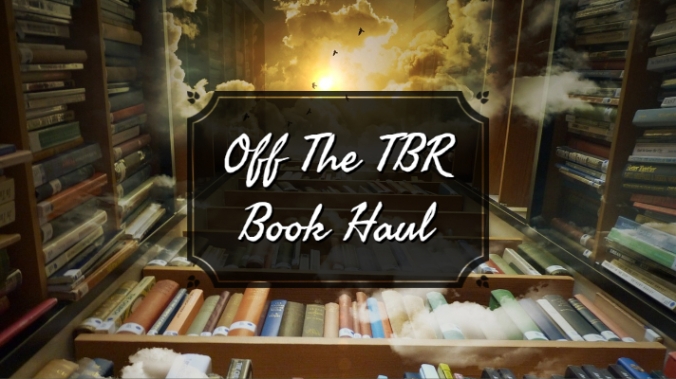 It’s time for another Book Haul post. One of my blogging goals for 2020 is to be to be more intentional about Book Haul posts. I’m aware that it’s possible nobody cares about the books I’ve bought or received, but I kinda like when bloggers post these because it not only puts new books in front of my eyeballs that I might not be aware of, but they also give me an idea of the blogger’s tastes. For my purposes a Book Haul post can include any book I’ve come to possess, not just those I buy, so arcs requested or just sent from publishers will be listed as well.

I can’t believe it’s already August. I mean sure we all feel like this year has been twice as long as any other in recent memory, but at the same time Autumn is right around the corner. I mean they’ve already started selling Halloween stuff at the grocery store. *Deep Breath* We will get through this.

I took a look at my leaning TBR and realized I only picked up four books in July. That’s good for my wallet, and doesn’t get me as far behind in my reading, but I won’t lie, I felt a little disappointed in myself. Every one of my July hauls were purchases and 3/4 of them are self-published. That last tidbit is due to the fact I’ve been trying to figure out what my reading list will be for Self-Published Fantasy Month in September. I still haven’t settled on my list for September but there’s good odds a couple of these will be on it.

Alright…I’ll quit jabbering and get to the good stuff…Here’s my July 2020 Book Haul.

The Thief Who Pulled On Troubles’ Braids, by Michael McClung
Amra Thetys #1
Self-Published

“Amra Thetys lives by two simple rules—take care of business, and never let it get personal. Thieves don’t last long in Lucernis otherwise. But when a fellow rogue and good friend is butchered on the street in a deal gone wrong, she turns her back on burglary and goes after something more precious than treasure: Revenge.

Revenge, however, might be hard to come by. A nightmare assortment of enemies, including an immortal assassin and a mad sorcerer, believe Amra is in possession of The Blade That Whispers Hate—the legendary, powerful artifact her friend was murdered for—and they’ll do anything to take it from her. Trouble is, Amra hasn’t got the least clue where the Blade might be.

She needs to find the Blade, and soon, or she’ll be joining her colleague in a cold grave instead of avenging his death. Time is running out for the small, scarred thief.” – Goodreads blurb

This book has been on my want list for a long time. It won the first ever Self Published Fantasy Blog Off #SPFBO hosted by Mark Lawrence so it already has some great credentials. In fact that’s how I first discovered it when I looking through lists of previous winners. I’ve heard nothing but good things about it from blogger friends who’ve read it. I’m something of a sucker for thief stories (don’t know why…I don’t like to steal things) and revenge stories…well…let’s just say I am always up for a good revenge story.

I’ll be reading The Thief Who Pulled On Trouble’s Braids as part of the Self-Published Fantasy Month Read Along in September. If you’ve never read a self-published book and want to try one out, or whether you just enjoy a good read along why don’t you join us?

“We were the worst kind of people. For the best reasons.

After a robbery gone horribly wrong, cursed thief Cord broadens his horizons and plans to execute the heist of a lifetime. With fellow thief and knife connoisseur Nenn in tow, the two build their ragtag crew to target the heart of the kingdom – Midian, the seat of tyrant King Anaxos Mane. As treachery, horrifying creatures of nightmare, and opposition bar their path at every turn, the gang must depend on skill – intellectual, martial, and magical – to deliver them an endless summer and keep them free from the clutches of evil despotism. If they don’t sh*t the bed first.” – Goodreads blurb

Not gonna lie, everything about this book sings to me. Awesome cover – check. Thrilling blurb – check. Heist story – check. Nightmarish creatures – check. Humor – check. I’ve been eyeing River of Thieves for a long time too and with Self-Published Fantasy Month coming up now was the time to buy it. I still haven’t decided if I’m reading it for the event but I’m REALLY thinking about it. If I don’t I’ll be reading it soon after.

Of Honey And Wildfires, by Sarah Chorn
Self-Published

“From the moment the first settler dug a well and struck a lode of shine, the world changed. Now, everything revolves around that magical oil.

What began as a simple scouting expedition becomes a life-changing ordeal for Arlen Esco. The son of a powerful mogul, Arlen is kidnapped and forced to confront uncomfortable truths his father has kept hidden. In his hands lies a decision that will determine the fate of everyone he loves—and impact the lives of every person in Shine Territory.

The daughter of an infamous saboteur and outlaw, Cassandra has her own dangerous secrets to protect. When the lives of those she loves are threatened, she realizes that she is uniquely placed to change the balance of power in Shine Territory once and for all.

Secrets breed more secrets. Somehow, Arlen and Cassandra must find their own truths in the middle of a garden of lies.” – Goodreads blurb

I’ve been wanting to read one of Sarah Chorn’s books for some time too. *There seems to be a theme here* I picked up Seraphina’s Lament (a separate series altogether) back in March and now Of Honey And Wildfires. I’ve only seen good reviews for Sarah’s books and this western inspired fantasy sounds really cool and is teasing me with a really intriguing magic system. Sarah wrote a guest post about Of Honey And Wildfires here on Off The TBR right before the time of the book’s release so check that out if you’re interested in the inspiration for her characters. I’m fairly certain I’m reading one of Sarah’s books for Self-Published Fantasy Month, I’m just not sure which one.

Sanda and Tomas are fleeing for their lives after letting the most dangerous smartship in the universe run free. Now, unsure of who to trust, Sanda knows only one thing for certain — to be able to save herself from becoming a pawn of greater powers, she needs to discover the secret of the coordinates hidden in her skull.

But getting to those coordinates is a problem she can’t solve alone. They exist beyond a dead gate — a Casimir gate that opened up into a dead-end system without resources worth colonizing, and was sealed off. To get through the dead gate, she needs the help of the enemy Nazca. But some Nazca are only interested in the chip in her head — and they’ll crack her open to get to it.” – Goodreads blurb

Wow…that cover image is really big compared to the others in this list. I’m not good with graphics or blog design so I’m leaving it as is, but wow.

On to the book. I read Velocity Weapon (The Protectorate #1) last November and loved it. Megan wrote a thrilling book with a bunch of minor and a pretty major twist and turn and I was hooked. Once I finished I couldn’t wait for book 2 to come out. And that cover! It’s so gorgeous. I can’t wait to pick up where Velocity Weapon left off and see what kind of narrative twists this one takes. I fully expect to be on the edge of my seat and turning the pages at a clip. I’m thinking of reading this one in November for Science Fiction Month. We’ll see.

Well, that’s my haul for July. Like I said, not a lot of books but more than I probably should have bought. I’m really excited about all of them and wish I could read them all right away. Have you read any of them? Are they currently on your TBR? If not has any caught your eye and is now on your want list? If so give me your thoughts.