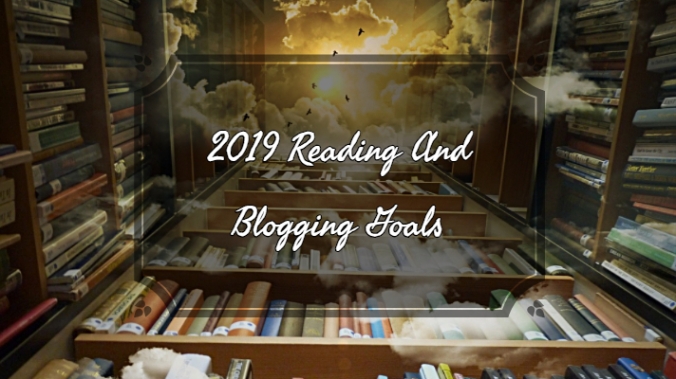 Because this isn’t simply a book review blog (I mean mostly yeah but not completely), it’s also my thoughts on books and reading and the blog in general, I’ve decided to take some time to address each one in more detail because I know you’re all riveted by it. OK, truth be told this is really to help me keep on task. Anyway, here’s the sixth deeper dive into my goals.

As I got older I lamented the fact that no more movies were forthcoming (this was before Episodes I – III) but it never killed my love for the story. Then, sometime in high school I discovered that Timothy Zahn had written the Heir To The Empire series telling the story of what happened after the destruction of the second Death Star. I snatched up copies of all three books and stayed up late reading. I still have my copies all these years later. 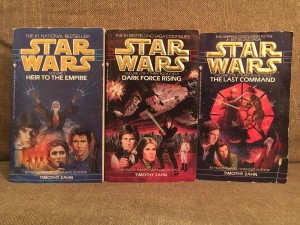 I went off to college and stopped reading a lot of fiction. At that point I was reading history books incessantly (geeky history major here) which continued after I was married. So all through the 90’s and 2000’s I didn’t really read any of the other Star Wars books that came out. I missed out on a TON of lore and some really great stories. I did pick up a couple other books at one point and started to read them but I never put a big dent in the expanded universe. There were so many books and I was so far behind in reading them I kind of gave up hope for ever doing it. For a while I was sad about that fact, but then when The Force Awakens was released and Disney decided to do away with the old canon I realized I had the perfect opportunity to start reading Star Wars novelizations.

I picked up Chuck Wendig’s Aftermath when it came out and started my Star Wars reading anew. As the years have progressed I read the full Aftermath Trilogy and others. As with any serialization some books have been better than others, and some were just…eh. But it’s STAR WARS so I want to keep reading!!!!

Here’s what I’ve read so far:

I rather enjoyed Wendig’s Aftermath trilogy. I know he received a lot of grief about his writing style and the stories themselves, but I liked them. Maybe I’m in the minority but I thought they did a good job of kicking off the new canon of stories and launching the book part of the franchise in a new direction. I also really enjoyed Dark Disciple and Twilight Company. The other books I liked for the most part with one or two exceptions.

The problem is that I read most of these kind of haphazardly. They didn’t stick in my mind as much as I would have liked. That’s due in large part to things I had going on while I was reading many of them. That’s something I want to rectify, which brings me to the point of this post.

I decided to add a reading goal this year devoted to Star Wars books. This is really a two-part goal, neither of which I expect to finish this year.

Get Caught Up On All The Books

The first part of this reading goal is to get caught up on all the new books. I know based on my current TBR and the second part of this goal (see below) that this isn’t something that will happen this year or probably even next year. But as a longer term goal I really want to reach a point where I’m up to date on all the Star Wars releases. I’d like to be ready when a new book comes out to read it and review it and not be behind everyone else.

Start My Star Wars Reading Over

Part two of this goal is to start over. That point I made above where I feel like a lot of the stories didn’t stick…I want to rectify that by starting over with Wendig’s Aftermath. One thing I’ve learned about writing reviews is they’ve helped me to remember the stories I’ve read a lot better than when I don’t write about them. I hope to go through all of the books I’ve already read, read them again and write reviews for each. This is another goal I don’t expect to accomplish this year. I know I don’t have the time to finish all the re-reads with my current reading schedule and that’s OK. In fact I may not even get to start the re-reads. Which brings me to my next topic…

Should I Postpone This Goal?

I’ve already planned out my reading schedule through the rest of the year. This includes books on my TBR, books I’ve been asked to review, and books I plan to read when they come out later in the year. At the moment I only have one Star Wars book on the list, Last Shot by Daniel Jose Older. 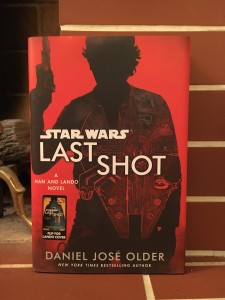 My schedule for the year could change, I could shift some things around and add some more Star Wars reads to the list, but at the moment Last Shot is it. The problem is one of my own making. I got too caught up with listing possible goals for the year before I’d really thought it all through. That, and I accepted a lot of requests early on which filled up my calendar in the early months. So, I may think about pushing this one out a bit. It was already going to be a multi-year goal anyway. We’ll see if I change my mind as the months go by.

In the meantime let me know in the comments what your fav Star Wars books are (yes you can include Legends). Have you liked the new offerings? Any that you’re looking forward to?