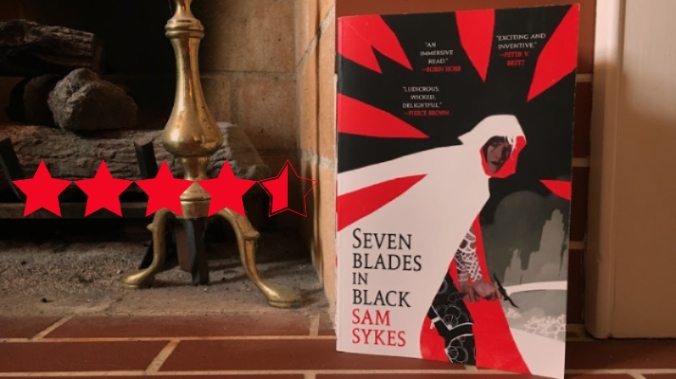 I was sent a copy of this book by the publisher.

Seven Blades In Black is the dark, gritty, sarcastic, epic, guns, swords, and sorcery revenge story you’ve been wanting, even if you didn’t know it.

I usually post the blurb from the back of the book in this spot but I don’t want to do that in this case. I almost feel it gives too much away and you the reader will enjoy the story more if you’re allowed to experience all its revelations as the narrative unfolds.

So here’s what I will tell you…

Seven Blades In Black is the story of Sal The Cacophony, and her quest for revenge. Actually it’s her confession. The book opens with Sal in prison being interrogated by Governor-Militant Tretta Stern for crimes against The Revolution. Sal is a Vagrant, a special kind of criminal, and she is to be executed once her confession has been given. Tretta wants to know what happened in two towns within The Scar (the land in which the story is set, torn between the Imperium and The Revolution) and to a particular soldier of the Revolution, Cavric Proud. What follows is a bloody tale of betrayal and vengeance fit to shake the world.

There are numerous characters big and small in this book. Here are, in my opinion the key ones:

Sal The Cacophony: Our protagonist. Sal is a Vagrant. She’s troubled, sarcastic, bitter, and has been hurt by those she loved in her past. She in turn hurts and lets down those she loves now. She’s on a quest for revenge chasing down a list of mages she wants to kill and will let nothing stand in her way, even friendships and lovers. She carries two weapons, an imperial sword she calls Jeff, and a magical gun called The Cacophony. She spends a lot of time thinking ill of herself for the ways she knows she’ll let everyone down and hurt those around her. Sal is a character you aren’t sure whether to love or hate. She is morally ambiguous, and like her friends and enemies in the book you have to choose whether you like her or not. I loved her.

Governor-Militant Tretta Stern: Tretta is Sal’s interrogator. She is the commander of Hightower, a Revolutionary outpost-town. She’s no nonsense (like her name implies) and wants answers about the crimes Sal has committed before she executes her. Tretta sees it as her duty to get those answers for The Revolution no matter what.

Cavric Proud: A Low Sergeant in the Revolutionary Army. Cavric has gone missing after encountering Sal, and Tretta Stern wants to find him. Cavric is a dedicated soldier, almost religiously so, and his faith in the Revolution is tested during his time with Sal. Cavric has some of the best character development apart from Sal.

Liette: A Freemaker and Spellwriter, and one of Sal’s former lovers. Also known as Twenty-Two Dead Roses In A Chipped Porcelain Vase (there’s some interesting names in this book). Liette is probably my favorite of the secondary characters. She’s a book lover (there’s some great lines in here fellow book lovers will enjoy) and intellectual creator, much the opposite of Sal. She loves Sal deeply even if she knows it will be painful.

If you didn’t notice the page count above, this is a big book. By that I mean I could clock you over the head with it and maybe knock you out big. With a book as long as this one you’ve got to have a story that’s well written and well paced if you want to keep your audience. Fortunately Sykes succeeds on both counts.

As I noted above I’d never read anything before now by Sykes and I had no idea what to expect. Well that may not be fully true. I’ve seen his posts on Twitter so I had a sense for his personality but that doesn’t always mean an author’s books will be the same. In this case it does. Seven Blades In Black is filled with sarcastic and irreverent humor, expressed predominantly through Sal. I found myself chuckling every chapter and nearly every page. It’s also dark and edgy. I mean it’s set in what’s essentially a wasteland fought over by two warring forces so that’s to be expected to some extent. But it’s also dark and edgy in terms of what happens to the characters, and more specifically what’s revealed about the characters. The humor takes some of the sting out of the dark tinges but you know it for what it is, a coping mechanism, at least for Sal.

The pacing is great. The story alternates between interrogation chapters set in the third person where Tretta is pulling information out of Sal and growing increasingly frustrated with her, and chapters set in the first person from Sal’s perspective detailing her version of events that have led up to her capture; her personal confession story if you will. They don’t alternate one for one, but rather there is an interrogation chapter followed by multiple story chapters. The interrogation chapters help to give pause to the flow after the mini climax arcs throughout the narrative. The story arcs are full of action, much of it intense battle scenes with guns, magic, steel, and even demons. There’s lots of action in this book so if you’re a fan of the stabby-stabby (or shooty-shooty) you won’t be disappointed.

But it isn’t all action. There’s a lot of background development teased out over the course of the book. Part of the pacing is the way Sykes parcels out character development through flashbacks and self-reflection on Sal’s part. It takes a while to discover what’s really driving Sal. You know she’s on a path of revenge but you don’t know why for a long time. It isn’t until about half-way through until you get your first real hints, and even longer before the full details emerge. Some readers may not like this plot device, preferring to have more details up front, or at least a little sooner. For me the delayed gratification served to heighten the suspense and overall impact of some of the big reveals that came later.

I loved the world building in this book and there’s a bunch of it. I took pages of notes while reading. The world building, like the character history and background, is parceled out over time. Some readers will find this frustrating but it made the reading enjoyable for me, making it more immersive; kind of like learning a new language and just diving right in, you have an idea of what’s going on but not all the details, then little by little things begin to click and all of a sudden WOW there’s a big payoff. I didn’t realize how true this was until I looked over my notes and skimmed some early chapters for details and realized just how many subtle things were laid out early and hinted at only to be fully revealed later on. So much so that a re-read would undoubtedly make me love the book more for all the little reveals I missed the first time through. This method also means there’s a whole lot less in the way of info dumps which I hate.

There are some very minor spoilers in the rest of this section so if you want the full immersion when you read the book skip to the next section, but nothing here should ruin your read.

The story is set within The Scar, a sort of no-mans land fought over by the Imperium and The Revolution. It has almost a Western genre feel to it but not quite. While the setting and story have some grimdark elements it isn’t really grimdark because you discover other parts of the world aren’t so bad, just this part.

The Imperium employs the use of powerful mages to do much of it’s fighting. Mages molded from a young age to develop their skills and serve the emperor or empress. The Revolution is made up of Nulls, those who lack magical ability. In place of it they use guns and mechanical wonders like tanks and manned robotic walkers armed to the teeth. The conflict between the Imperium and The Revolution is complicated by a third faction, The Crown Conspiracy, a group of mages who also rebelled against the empire after the birth of a Null heir who they refused to serve. They don’t play well with The Revolution either because, well, they hate Nulls.

The magic system is really well developed. There’s a huge array of different types of mages; mendmages, maskmages, doormages, nightmages, siegemages, and on and on. Each mage type excels in a different type of magic; a magic that comes with a cost. You see mages derive their powers from The Lady Merchant (a being/entity/deity?) whose origins and existence are obscure. The Lady Merchant gives you the gift of magic but always takes something in return, something different for each type of magic, be it memories, physical features, sanity, etc.

“They call it art and dress it up with fancy words and complex theories, but magic is as simple as love. It is just a price and a person willing to pay it.”

In addition to the above groups there are Freemakers; scholars and tinkerers whose primary love and duty is to knowledge and learning, some of whom are spellwrites with the ability to use magic in the form of writing and glyphs carved into objects and even people. There are Ashmouths, a band of thieves and assassins roving the countryside. Then there are the Havenites, fanatical followers of The Seeing God some of whom have the ability to use magic even if no one knows how. This mix of people and groups makes for volatile setting in which the narrative plays out.

Oh and did I mention people ride giant birds instead of horses? Yeah there’s that.

I really enjoyed this book. Sykes delivers a fast paced thrilling read that is both brutal and poignant. He does so with humor, vulgarity, and all kinds of stabb-stabby and shooty-shooty. It’s a narrative of vengeance, revelation, and confession drawn out over time that explores the depths of the protagonist’s soul and the harsh existence of her life. It’s a story about love, friendship, and betrayal; whether it’s individuals the characters are close to, or the powers and entities that control their lives, all of which is very personal. It’s a tale of purpose in life, bargains struck, and allegiances owed and whether they be kept or lost. It’s an account of a morally ambiguous heroine; what created her, what drives her, and what she still lives for. Throughout it all you’ll be kept on the edge of your seat as Sykes teases you with little morsels of background here, and big meaty chunks of detail there right up until the end when you see how the interrogation ends and whether vengeance was served.

Sykes has a new fan. I’ll definitely read this one again, and I can’t wait for the next installment in The Grave of Empires.