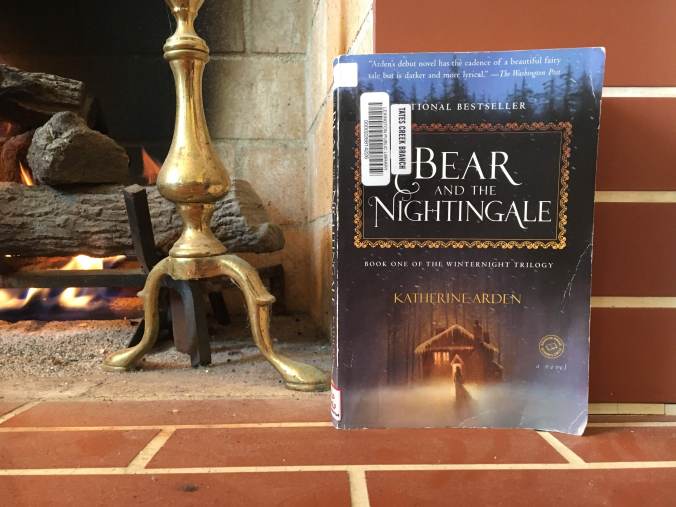 “Winter lasts most of the year at the edge of the Russian wilderness, and in the long nights, Vasilisa and her siblings love to gather by the fire to listen to their nurse’s fairy tales. Above all, Vasya loves the story of Frost, the blue-eyed winter demon. Wise Russians fear him, for he claims unwary souls, and they honor the spirits that protect their homes from evil.

Then Vasya’s widowed father brings home a new wife from Moscow. Fiercely devout, Vasya’s stepmother forbids her family from honoring their household spirits, but Vasya fears what this may bring. And indeed, misfortune begins to stalk the village.

But Vasya’s stepmother only grows harsher, determined to remake the village to her liking and o groom her rebellious stepdaugher for marriage or a convent. As the village’s defenses weaken and evil from the forest creeps nearer, Vasilisa must call upon dangerous gifts she has concealed – to protect her family from a threat sprung to life from her nurse’s most frightening tales.”

Oh man…this book. I’ll be honest, I didn’t know if I was going to like it when I set out to read it. Yeah I’d seen a lot of reviews rating it highly but I still wasn’t sure it was for me. Boy was I wrong…this was so me.

Arden weaves a modern story that feels like a fairy tale set in medieval northern Rus. It is atmospheric and bewitching, with captivating prose and compelling characters that will transport you to another time and place. A place so richly described you can smell the earth, feel the cold, and sense the spirit world around you.

So where should I begin? Let’s start with the fairy tale because that’s what this really is, a modern telling of what feels like a classic tale. I mean sure it’s a lot longer than a normal fairy tale but once you start reading you don’t notice the length. To create this Arden weaves together medieval Russian history (with some characters based on real people), Russian tradition and folklore, and elements of Russian fairy tales into a tapestry of you can sense and feel. In the back of the book there’s a Q&A section where Arden notes she spent some time living and studying in Russia and she used that experience in crafting the novel. I’m sure native Russians might object or at least quibble with my statement above, but to me I felt transported to another time and place and felt like I was experiencing another culture’s folklore even if it was presented for a western palette.

When I say it is ‘atmospheric and bewitching’ I really don’t know how else to describe it. You know when you read a book and the only way to describe it is “atmospheric” because there’s no other good way to relate how it grabs hold of your mind? Or how you can sense an other-worldly quality to the story – one set in our world but existing at some liminal space on the edge of the seen and unseen boundaries of reality? That’s this book. I mean it is in a literary sense when you consider how some characters can see the fairy and demon creatures around them while others can’t. But what Arden accomplishes is something that many authors don’t (or can’t) do, which is make the reader sense it to. I mean I wanted to check my oven for a domovoi (household guardian-spirit) and offer it bread if it could help with some mending around the house. It is bewitching, not just because some of the characters are witches but because of how the story with it’s atmospheric prose and those beguiling characters entrap you.

Another thing you’ll notice (even if you can’t place it at first) and which is discussed in the Q&A section is how this story feels different than the fairy tales and folklore of Western Europe. I definitely sensed this was a different kind of narrative even if I didn’t realize what it was at first. In some ways I still can’t put my finger on the difference, but you’ll sense it too. Maybe this is due to the fact that most western fairy tales aren’t read anymore in the original and have instead been passed through a Disney lens, but I think there’s more to it than that in terms of characterization for both protagonists and antagonists, as well as motivations and agency.

And what about those characters? There are a bunch of them, but mostly they center around the Vladimirovich family. The whole family is compelling and I fell in love with all of them to one degree or another. My favorite was obviously the protagonist Vailisa, or Vasya for short. She’s such a beautifully written character. I say that not in terms of descriptive visual beauty but the quality of how she’s written. Vasya is an every day heroine (even if she is a country lords daughter). She is strong, intelligent, and courageous. As Vasya becomes aware of her abilities and how she’s different than everyone else she must wrestle with how to interact with the two realities in which she exists. Really one reality that only some can sense fully. Vasya knows she is different and doesn’t always do what is expected of her as an unmarried female in a small Russian village – she wouldn’t be a good protagonist if she did – but at the same time she understands what her role is supposed to be and knows when she can and can’t act outside of it. This dual realization on her part provides much of the tension she experiences and character development she undergoes throughout the story.

I also really liked Vasya’s step-mother Anna. Anna is a character you could easily hate. I mean aren’t all step-mothers in fairy tales evil step-mothers? Anna is written such that many could feel this way about her, but she is also a character who isn’t one dimensional. You understand the moment you’re introduced to her what her fears and motivations are and how they will impact her character. You understand that she isn’t evil, she’s afraid, and that it is her fear that drives all her actions. In knowing this detail she becomes more well rounded and it’s much harder to hate her, even if you hate what she tries to do.

If you’re still with me you’ll remember I said way up above that the story would take you to another time and place, “A place so richly described you can smell the earth, feel the cold, and sense the spirit world around you.” I wasn’t lying. The Bear And The Nightingale was one of two books I chose to read for February because I wanted a winter theme to go along with the month. We didn’t get much of a winter this year and February has been strangely warm, but this book made up for that. The weather – the cold, the storms, the winter – is almost a character itself in the book. So is the land in which the story is set. The two together are written so beautifully that I felt I could feel them, smell them, taste them almost.

Then there’s the spirit-world, the demons, the fairies of the fairy tale. They add such a rich texture to the novel even if many only play a small part. There are greater and lesser beings in this spirit world and each one I encountered added significant depth to the story. Whether it was Frost, the winter demon, or any of the household guardians or guardians of the wood and lake they each made the book come alive and brought the fairy world near.

I always like to say a little something about themes and motifs in the stories I read and this one is no exception. Besides the obvious fairy tale aspect of the narrative, and the way the weather and land play into the story that I’ve already noted, there is another which arcs throughout; the conflict between old gods and new, traditional religion and Christianity. The old is in conflict with the new, and yielding to it. It is this power shift which seems to set off the conflict in the book as the fairy-demon world reacts to encroachment by the newer Christian faith which seeks to stamp it out. Some conservative Christian readers will not like the way Christianity is presented in relation to traditional Russian beliefs, but I don’t think Arden was trying to slam Christianity per se, but rather the ways in which modern ideas and beliefs attempt to asset their dominance by stamping out the old. And in this story it is more complex than just saying it is the Christian faith and its followers who are doing this. What is important is the way the adherents of the old beliefs defend their faith, and what they know to be real and not just a “fairy tale.”

Whew…I didn’t think I’d say this much and I’m thankful for those of you who stayed with me till now. I’m not sure what else to say about The Bear And The Nightingale that I haven’t already said. If you’re looking for a great winter read and love fairy tales you should really enjoy this book. If you’re looking for both of those things and live for atmospheric prose to take you away to another place and time you’ll love this book. I know I did.

13 thoughts on “The Bear And The Nightingale Review”