So yeah…I’m gonna look at them as more what you’d call guidelines and post my monthly reading goals. These are goals, or guidelines for what I would like to read during the month. I reserve the right at any time to chase the next shiny object that comes by and read something else. I also add the disclaimer that life can get in the way at any time. With those things being said, here’s my list of reads for February 2019… 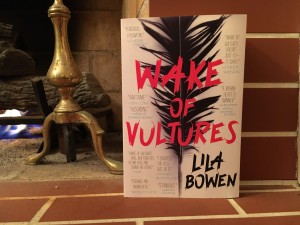 Wake of Vultures, by Lila Bowen

“Nettie Lonesome dreams of a greater life than toiling as a slave in the sandy desert. This is all she knows, until she survives an attack by a stranger and is awakened to the sinister truth of the world around her.

Wake of Vultures is the first novel in the shadow series featuring the fearless Nettie Lonesome.”

Part Western, part weird 19th century dystopia? I started Wake of Vultures in January after giving up on Stranger In A Strange Land. It wasn’t that Heinlein was bad, it just wasn’t grabbing me. That and I think I’d been staring at Wake of Vultures on my TBR for so long that I couldn’t resist any longer. I bought it over a year ago after discovering Delilah Dawson (Lila Bowen is a pen name) on Twitter and I’ve almost picked it up at least a dozen times since. I was probably influenced a little to start it now by a recent review I’d read by Grimdark Dad (read his Wake of Vultures Review here). I’m about a third of the way done and enjoying it so far.

Yearly Reading/Blogging Goal Accomplished: Reduce the size of my TBR.

The Bear And The Nightingale, by Katherine Arden

“Winter lasts most of the year at the edge of the Russian wilderness, and in the long nights, Vasilisa and her siblings love to gather by the fire to listen to their nurse’s fairy tales. Above all, Vasya loves the story of Frost, the blue-eyed winter demon. Wise Russians fear him, for he claims unwary souls, and they honor the spirits that protect their homes from evil.

Then Vasya’s widowed father brings home a new wife from Moscow. Fiercely devout, Vasya’s stepmother forbids her family from honoring their household spirits, but Vasya fears what this may bring. And indeed, misfortune begins to stalk the village.

But Vasya’s stepmother only grows harsher, determined to remake the village to her liking and to groom her rebellious stepdaughter for marriage or a convent. As the village’s defenses weaken and evil from the forest creeps nearer, Vasilisa must call upon dangerous gifts she has long concealed—to protect her family from a threat sprung to life from her nurse’s most frightening tales.”

The Winter Road, by Adrian Selby

“The Circle – a thousand miles of perilous forests and warring clans. No one has ever tamed such treacherous territory before, but ex-soldier Teyr Amondsen, veteran of a hundred battles, is determined to try.

With a merchant caravan protected by a crew of skilled mercenaries, Teyr embakrs on a dangerous mission to forge a road across the untamed wilderness that was once her home. But a warlord has risen in the wilds of the Circle, uniting its clans and terrorizing its people. Teyr’s batles are far from over…”

These were the first two books I selected for the month back when I started some of my yearly planning. I wanted to find some winter reads for February because this is the month winter really seems to settle in around here, and these two looked to fit the bill. I mean hell they have winter in the title! It didn’t hurt that I’ve seen pretty much nothing but good reviews of both of these books. I know I’m a little behind with The Bear And The Nightingale but better late than never right?

Yearly Reading/Blogging Goal Accomplished: None…unless I add a new category for keeping up with recent releases.

The Falconer, by Elizabeth May

“Edinburgh, 1844. Beautiful Aileana Kameron only looks the part of an aristocratic young lady. In fact, she’s spent the year since her mother died developing her ability to sense the presence of sìthichean, a faery race bent on slaughtering humans. She has a secret mission: to destroy the faery who murdered her mother. But when she learns she’s a Falconer, the last in a line of female warriors and the sole hope of preventing a powerful faery population from massacring all of humanity, her quest for revenge gets a whole lot more complicated. Now in paperback, this electrifying thriller—the first volume of a trilogy from an exciting new voice in young adult fantasy—blends romance and action with steampunk technology and Scottish lore in a deliciously addictive read.”

I came across Elizabeth May on Twitter somehow. I’m not sure when or how exactly, but her Twitter is entertaining. Unless you’re on her bad side. Then it’s only entertaining for the rest of us. She’s an American in Scotland and has a PhD and writes YA fantasy and some sci-fi as well. The Falconer is the first in the Falconer Trilogy. And it has romance! Shh…don’t tell anyone I’m gonna read a romance novel.

OK, let me say right now I’ve never been interested in romance as a genre. Never. Not once. Ever. So, “why” you ask, “why are you wanting to read a romance book?” Well…It’s February…you know Valentines and whatnot. And…well…I thought maybe I should give it a chance. I feel guilty every time my Twitter friends go off about not bashing romance, and I realize it’s possible I might not hate it. I know, some of you are like, “c’mon Jason that’s a sucky way to look at it.” Sure, but baby steps OK? Let me dip my toe in the water first. I also admit my only real exposure to romance as a genre is from all the old Harlequin Romance novels my mom used to read. I glanced at one or two of those as a kid and was like “nope.” I’m gonna take a chance on this one that maybe it isn’t like those. My gut says fantasy romance will be you know…fantasy…with romance. So we’ll see if I like stabby stabby with kissy kissy. Who knows.

This also counts as a self-pub read. One of my blogging goals this year is to read more self-pub/indie books and I’d like to do at least one a month. So there ya go.

“Behind its walls, the Convent of Sweet Mercy has trained young girls to hone their skills for centuries. In Mystic Class, Novice Nona Grey has begun to learn the secrets of the universe. But so often even the deepest truths just make our choices harder. Before she leaves the convent, Nona must choose which order to dedicate herself to–and whether her path will lead to a life of prayer and service or one of the blade and the fist.

All that stands between her and these choices are the pride of a thwarted assassin, the designs of a would-be empress wielding the Inquisition like a knife, and the vengeance of the empire’s richest lord.

As the world narrows around her, and her enemies attack her through the system she is sworn to, Nona must find her own path despite the competing pulls of friendship, revenge, ambition, and loyalty.

And in all this only one thing is certain: there will be blood.”

Do I even need to give you a reason for this one? I mean c’mon. Alright fine, I finally read Red Sister last month and oh my freaking goodness! Yep, loved it. As if there would be a doubt. Book three, Holy Sister comes out in April so that means I need to get book two read ASAP! That’s really all that needs to be said I think. If you’d like to read my review for Red Sister you can find it here.

Whelp…that’s my tentative reading list for February 2019. I’m not sure I’ve got enough time for all of them but I’m gonna give it a go. You should place bets on whether I read them all. Unless you have a gambling problem. In that case don’t place bets, do something else, like read them with me! Any of these on your February list?