It feels a little strange to be writing this post today. I started 2017 with a goal of trying to see just how many books I could read in the year. There was no set amount, I was just going to note a few words about them as I went and post pictures to facebook and twitter with pictures of my bedside bookshelf as it filled up with each read. By the end of the year I was blogging and writing reviews. So who knows what I’ll be doing this time in 2018.

Last night I took a look back at my list. I read 47 books in 2017. I’ve discovered that’s not a lot compared to some of you but I feel pretty good about it. I’ve put the full list at the bottom of this post. There’s some really good books in that list. I didn’t get to read as many works published in 2017 as I would have liked and there were a lot of great books to come out in the SFF world this year. I wish I could have got to more of them.

Anyway, for this post I’ve listed the seven books that I either gave a five star review on the blog, or that I would have given a five star review had I been blogging at the time I read it. Four of the seven are debuts! Not all of them fall into the speculative fiction focus of the blog but I do read a wider selection. You’ll even notice some history books at the bottom where I’ve listed all the reads of the year. So here you go…my best of 2017 in the order I read them.

The Shadow Of The Wind
By Carlos Ruiz Zafon, Lucia Graves (translation)
Published 2004

This was the first book I read in 2017 and it set a really high bar. Set in post-war Barcelona, a book dealer takes his son Daniel to The Cemetery Of Forgotten Books where he selects one that will be his to watch over. He selects The Shadow Of The Wind written by Julian Carax. When he starts looking for other titles by this mysterious author he discovers they have all been rounded up and destroyed. Daniel it seems has the last remaining copy of any of his works. Daniel soon discovers he has stumbled upon a mystery filled with love, betrayal, and murder. Daniel’s life may be in danger too.

I can’t tell you how much I loved this novel. It is one of the most beautifully written books I’ve ever read with haunting prose. A lot of credit should go to Lucia Graves for her translation. The story is beautiful, tragic, and heartbreaking. It’s the kind of book where the setting becomes as much of a character as the characters themselves. It made me a fan of Zafon and I’ll be reading more of his work in 2018.

The Sympathizer won the 2016 Pulitzer Prize for fiction. It deserved every bit of that win. It’s a book about the aftermath of the Vietnam War told from the perspective of a South Vietnamese officer who happens to be a communist double-agent. It explores the life of Vietnamese refugees after the war told from the Vietnamese perspective set in both Vietnam and the United States. On one level it is a spy novel. On a much deeper level it is an eviscerating exploration of the American experience in war and peace. But it is above all else a book about Vietnam, and the Vietnamese people. It’s a story told through their lens about the war and it’s aftermath.

There are two notable things that stood out to me about the book beyond the story itself. One is the narrator, the book’s protagonist, is never named. From start to finish you never learn his name. I wonder if the intention was to allude to the fact that his story is the story of every Vietnamese refugee in one way or another. The other thing is there are no quotations in the dialogue. None. What’s funny is it is written so well I didn’t even notice at first. Even with no quotations there is no difficulty in figuring out what is being spoken out loud and by whom, and what isn’t.

I started reading this about the time President Trump’s travel ban was hitting the news. It seemed a perfect book for the moment. What I discovered was The Sympathizer is so much more. I don’t think I could ever do this book justice in a review. If you read only one book from a non Western/non U.S. perspective this year read this one. 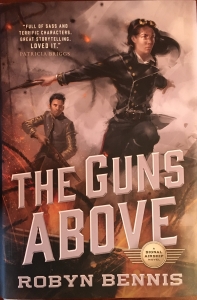 The Guns Above
By Robyn Bennis
Published 2017

How to categorize this book…It’s part black powder fantasy, part steampunk, and part science fiction. But it’s not exactly fantasy, not exactly steampunk, and not exactly science fiction. One reviewer called it “steampunky” and that comes pretty close. But I hesitate to call it steampunk because it doesn’t have the feel of traditional steampunk. I kind of want to call it classic science fiction. And by that I mean The Guns Above has the feel of something that could have been written in the late 19th century looking ahead to airships armed with cannon. At some point I want to write a review and flesh these thoughts out. It deserves a review. I’ll do it. I’ve just been lazy.

Anyway, The Guns Above is the first book in the Signal Airship Series and Bennis’ debut novel. It’s the story of Auxiliary Lieutenant Josette Dupre who becomes the first woman airship captain in Garnia when she is given command of the Mistral. She’s been set-up for failure however and watching over her shoulder is the foppish Lord Bernat who has no military experience, sent to keep tabs on her by his uncle.  When Garnia’s enemy the Vinzhalia launches a renewed attack Josette and her crew sweep into the fray where they must navigate the winds of war while having a spy in their midst and a military hierarchy out to see them fail.

The Guns Above is funny, witty, and a great black powder war story. And it has airships…with cannon. You can tell Bennis put a lot of research into the science behind how airships would work. These look and feel more like real zeppelins or blimps than the typical steampunk airship, and because of that you come away thinking they really could exist. I absolutely loved the action scenes. At one point I thought to myself this is like reading submarine warfare as written by Tom Clancy in The Hunt For Red October except it’s set in the sky. I also really loved Josette and Bernat. Both characters play well off each other and given that Bernat has a thing for more mature women there isn’t an unnecessary love interest between the two to screw things up.

Book two By Fire Above comes out in May and I already have mine on order. 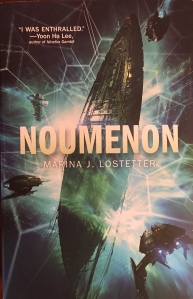 Noumenon is a story of humanity’s exploration of the stars. Or one star in particular. An anomalous star has been discovered that seems to defy the laws of physics. Astrophysicist Reggie Straifer proposes a plan to send a deep-space mission to investigate it and return home with its findings. The big catch however is the journey will take centuries. Generations of crew will live and die before the mission ever returns home. How will they do it while also ensuring a talented make-up for the thousands of crew spread across nine ships required for this undertaking? The answer…clones.

This book was nowhere on my radar until just about the time it was released. I read a few early reviews and picked it up. It was a lot more than I expected. I’d say it’s more social science fiction than hard science fiction. It explores what might happen on a scientific journey through space lasting centuries while retaining the same genetic make-up through the use of clones. What kind of society forms out of that pot? How does it evolve? What conflicts arise? What has to be shed from their previous earthly cultures? What remains? How do they return home? Will Earth even be home anymore?

There were times reading Noumenon that I felt joy and times I felt gutted. Lostetter did a fantastic job with her debut and I look forward to more.

(From this point forward I started the blog. So from here on out I’m only giving a short blurb that will include a link to the review…there’s no need to repeat what I’ve already written.)

If you grew up loving Mad Max and Terminator movies but wanted to know what really happened after Skynet won the war, C. Robert Cargill has the answer in the dystopian science fiction thriller Sea Of Rust. Pull up a chair, grab your favorite caffeinated beverage and strap yourself in for one of the best SF books of the year.

You can read the rest of my Sea Of Rust review here. 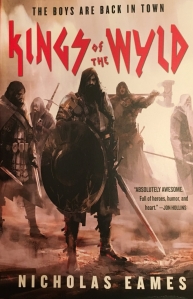 Kings Of The Wyld
By Nicholas Eames
Published 2017

Fantasy meets Classic Rock and turns it up to eleven! There, this review is essentially done. Nothing else really needs to be said. Now go get a copy of this book!

Ok I was kidding, plenty more should be said about Kings Of The Wyld. It was perhaps my favorite book of the year which is saying A LOT! Check out my full review here. 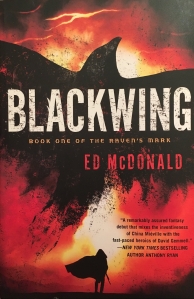 “Slowly realizing I like grimdark more than I thought I did.” That was my reaction just a few chapters into Ed McDonald’s dark, gritty, and bloody debut, Blackwing. If this book doesn’t make you a fan of the grimdark genre nothing will.

Blackwing is the most recent book I’ve reviewed on the blog. It’s grimdark with light at the end. Check out the full review here.

So…what were these books up against? I don’t like to think of it as a competition, but I read and enjoyed a lot of really great stuff this year. The list is below in the order I read them minus the books above.

Bloodline by Claudia Gray
The Fireman by Joe Hill
1984 by George Orwell
Battle At Bull Run by William C. Davis
Catch 22 by Joseph Heller
Brave New World by Aldous Huxley
Redshirts by John Scalzi
Aftermath: Empire’s End by Chuck Wendig
The Scattered And The Dead by Tim McBain and L.T. Vargus
Battle At Bannockburn 1314: by Aryeh Nusbacher
Interview With The Vampire: by Anne Rice
Old Man’s War by John Scalzi
The Ghost Brigades by John Scalzi
The Last Colony by John Scalzi
Zoe’s Tale by John Scalzi
The Collapsing Empre by John Scalzi
American Gods by Neil Gaiman
Thrawn by Timothy Zahn
Lincoln In The Bardo by George Saunders
The Lightning Thief: Percy Jackson And The Olympians by Rick Riordan
The Gunslinger by Stephen King
A Darker Shade Of Magic by V.E. Schwab
River of Teeth by Sarah Gailey
The Drawing Of The Three by Stephen King
Bloody Hill by William Riley Brooksher
Horus Rising by Dan Abnett
Arabella Of Mars by David D. Levine
Inferno Squad by Christie Golden
False Gods by Graham McNeill
The Emperor’s Blades by Brian Staveley
The Providence Of Fire by Brian Staveley
The Last Mortal Bond by Brian Staveley
The Prey Of Gods by Nicky Drayden
Buffalo Soldier by Maurice Broadus
Locke & Key, Vol 1: Welcome To Lovecraft by Joe Hill
The Human Division by John Scalzi
Promise Of Blood by Brian McClellan