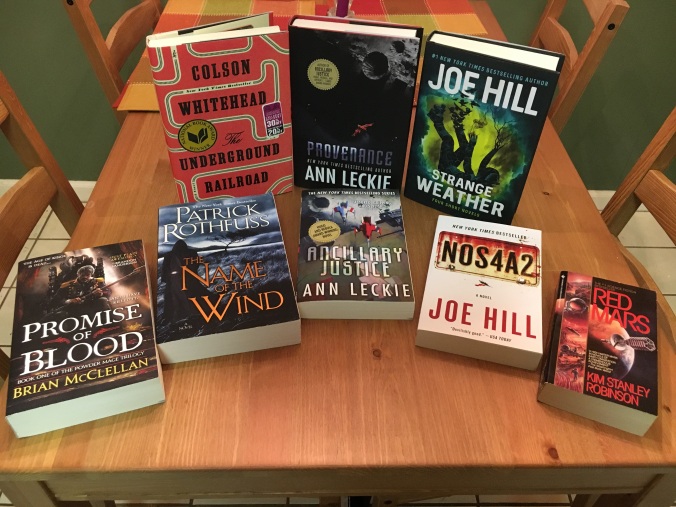 So what is the TBR short stack? For me it’s my small to be read pile; the one sitting in the cabinet beside my reading chair. This is the pile of books I’ve selected to read next in no particular order. The short stack is not to be confused with all the other books in the house that are on my to read list. Those other books will sit on shelves collecting dust until I finish the short stack, and until I quit adding to it with other books that catch my eye and I pick up week to week. I’m like a dog seeing a squirrel that way.

Currently I have eight books on the short stack not including what I’m reading now. Here they are in no particular order with a little blurb about why they’re on the stack:

Joe was in town a couple Fridays ago at my local independent bookstore signing his new book. I couldn’t not go, and while I was there I couldn’t not buy the new book. Add it to my list of new 2017 reads to complete.

See above…I couldn’t leave with only one book right? I also picked up the first volume of Locke & Key but I finished it before Halloween. So now I just have these two. This one may be a December read.

Ann was recently at the bookstore for a signing too. (You may pick up on a theme here). She was on tour signing her new book and well you know how it goes.

At the signing I realized that Provenance is set in the same universe as Ann’s other books which of course I have not read. So, before I can read Provenance I need to read the Ancillary series too. (You can expect to see more of this kind of thing from me). This one won the Hugo Award, Nebula Award, BSFA Award, Arthur C. Clarke Award, and Locus Award so my expectations are probably already too high.

This one won a the BSFA and Nebula Award. I actually read Red Mars years ago but I never finished this classic series. I really want to read Green Mars and Blue Mars but I know too much time has gone by for me to remember what happened in Red Mars that I need to re-read it before picking up the others. This one has been on the short stack longer than any of the others. Like since January.

The Underground Railroad by Colson Whitehead

I bought this one many months ago and really need to read it. One of my goals each year is to read the Pulitzer and National Book Award winners. Well this one won both (2017 Pulitzer; 2016 National Book Award) as well as the Arthur C. Clarke Award, 2017 Andrew Carnegie Medal for Excellence, and it was long listed for the 2017 Man Booker Prize. So yeah, I have high expectations.

Promise of Blood by Brian McClellan

Here is where ya’ll start to say mean things about me. Yes I know I’m late to the game on this one. But in my defense I spent 4 years in grad school not reading books for fun and now I’m playing catch-up. I need to start this one so I can move on and finish the series. Won the Morningstar Award for best fantasy newcomer.

The Name of The Wind by Patrick Rothfuss

OK…I get it…I know…this is one of the modern classics…how could I not have read it yet…yes I know I suck. See my excuse above. I’m playing catch-up. AND I’ve been trying to read new books published this year before reading too many older ones. Yeah I know that’s a horrible excuse. I really have no excuse. I’ll just shut up now and go read.

So…what’s on your TBR short stack?

3 thoughts on “The TBR Short Stack”